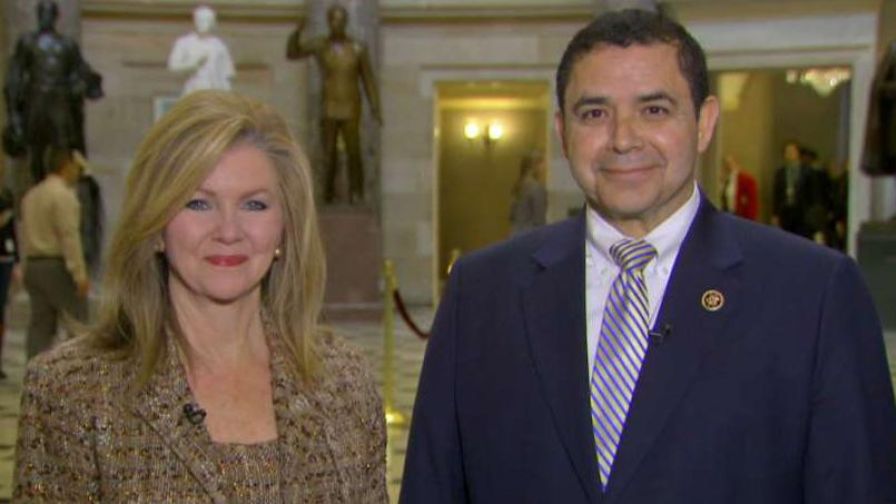 President Trump told Republican lawmakers Tuesday that he would “love to see a shutdown” of the federal government if Democrats do not support his proposed changes to immigration law.

Trump made the comments as GOP leaders raced to muster support for yet another stopgap spending bill that would keep the government open through March 23. Under a previous agreement, funding is scheduled to run out at 11:59 p.m. Thursday.

The White House has proposed steep cuts in legal immigration and increased border security, including a wall along the U.S.-Mexico border, in exchange for continuing protections for hundreds of thousands of immigrants who were brought to the U.S. illegally as children. Democrats have balked at the proposals and forced a three-day government shutdown over the issue last month.

House Republican leaders announced Monday that they would try to pass the stopgap measure, known as a continuting resolution, by attaching it to a full-year, $659 billion Pentagon spending bill that’s a top priority of the party’s legion of defense hawks. House Democrats were not expected to support the measure due to lack of progress on a deal to replace the Obama-era Deferred Action for Childhood Arrivals (DACA) program for those young immigrants, which Trump ended last year.

In addition, Schumer has said that even if the measure passed the House, it “would be barreling head-first into a dead end” in the Senate, where it needs 60 votes.

Sources tell Fox News the Senate could respond by reaching a deal to lift caps on both defense and non-defense spending. Such an agreement could increase funding for the Pentagon by as much as $80 billion-$85 billion and domestic spending by as much as $40 billion to $45 billion.

Under Washington’s arcane procedures, if the broad-brush agreement to increase spending caps is approved, it will then be followed by a far more detailed catch-all spending bill that would take weeks to negotiate.

House Minority Leader Nancy Pelosi, D-Calif., has repeatedly attempted to link a budget deal with legislation to address DACA, but other Democrats are beginning to agitate for unlinking the two.

Meanwhile, White House Chief of Staff John Kelly added fuel to the DACA controversy, telling reporters that some immigrants may have been “too afraid” or “too lazy” to sign up for the program.

Kelly was speaking in an effort to defend the White House immigration plan, which offers a path for citizenship for up to 1.8 million people, nearly three time the number of immigrants in the DACA program.

There are 690,000 official DACA registrants and the president sent over what amounts to be two and a half times that number, to 1.8 million,” Kelly said. “The difference between (690,000) and 1.8 million were the people that some would say were too afraid to sign up, others would say were too lazy to get off their asses, but they didn’t sign up.”

Kelly said Trump would likely reject an effort to pass a short-term extension for the program, which is set to expire on March 5. Barring a last-minute agreement — which seems unlikely — Senate Majority Leader Mitch McConnell, R-Ky., has said his chamber will begin considering the issue, a debate that GOP leaders expect to start next week.