Amnesty Plan From WH Is the ‘Self-Impeachment Act of 2018’ 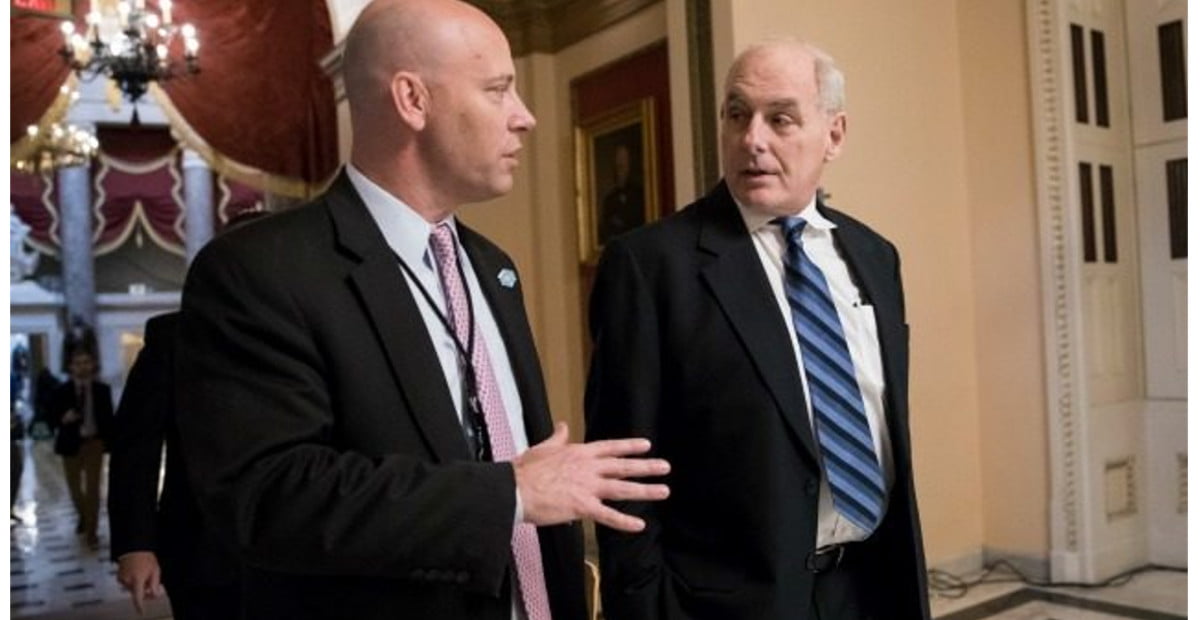 “It electrifies the Democratic base and dispirits your own Republican base, and that is the recipe for a wipeout” in November, said Dan Horowitz, editor at Conservative Review. “You could call it the Self-Impeachment Act of 2018,” he added.

Democrats, however, are happy to portray the surrender as merely cowardly and hateful, unAmerican, racist, evil, and hostage-taking.

The incompetence of the aides is shown by the timing, say critics.

The demoralizing amnesty plan was published just after Senate Democrats threw in the towel after losing their amnesty-of-shutdown threat in the face GOP’s Trump-style rhetoric, just after Democratic Sen. Dick Durbin admitted his “Gang of Six” bill was deadamid widening Democratic splits,  just after GOP leaders got comfortable using the powerful charge that Democrats will favor illegals over Americans, just after House GOP leaders began to push Rep. Bob Goodlatte’s Trump-approved immigration bill, and just after voters — including minorities — starting moving back towards the GOP, and just after the Supreme Court moved the supposed DACA deadline to June.

The malpractice is shown by the terms of the proposal, which contradicts Trump’s claim to be a master negotiator, by offering many concessions without getting anything in return, and by front-loading the amnesty while deferring potential benefits for Americans until after the November election and even the 2028 election.

The proposal says it will help Americans in the workplace by cutting back chain-migration — but it actually allows all 4 million people in the backlogged chain-migration pipeline to become citizens over the next 15 years or so.

The proposal says it cancels the visa lottery, but it just diverts the lottery visas to accelerate the arrival of the siblings, and elderly parents previously picked for citizenship by semi-random visa-lottery winners.

The proposal says it offers amnesty to an estimated 1.8 million younger illegals — but it suggests no rules to limit the likely fraud, undercounting and judicial appeals that could ensure a supercharged repeat of the 1986 amnesty, when the legislature’s promise of 400,000 green cards to agriculture workers quickly became the bureaucracy’s award of 1 million green cards. In effect, the administration is creating a courtroom right for every future wave of young illegals to claim amnesty, and a huge incentive for hundreds of millions of loving parents to smuggle their children into the United States.

The proposal does ask for $25 billion to build a border wall, but it also rejects proposed laws that would allow criminal charges against people who fly over the wall, overstay their tourist visas and claim their children are dreamers too. Instead, overstays are to be merely deterred by a quick departure or “expedited removal,” the proposal says.

“Basically they have negotiated with themselves to the point where think they can get Senate buy-in on this,” said Jenks. She continued:

By starting left-of-center … they are guaranteeing that this bill will move to the left, and they are undercutting the opportunity to pass a good bill in the House. I don’t understand the reasoning on this.

Trump wrote in his bestseller, The Art of the Deal, that “the worst thing you can possibly do in a deal is seem desperate to make it. That makes the other guy smell blood, and then you’re dead.”

“I’ve never read [The] Art of the Deal, but I’m not sure this is how you negotiate,” said Dale Wilcox, executive director of the Immigration Reform Law Institute. “I mean, this is where they’re starting? 1.8 million? Where are they going to go from here?” he said in a Thursday interview on SiriusXM’s Breitbart News Tonight with co-hosts Rebecca Mansour and Joel Pollak.

Trump is being slashed by the Democrats as a racist, and “he is very conflicted on this,” said Horowitz.  “He has good instincts, but he has a lot of people around him who are best are clueless, and at worst, are working for the other side.”

The greed is shown by the proposal’s refusal to reduce the supply of foreign labor which has repeatedly forced down wages or Americans’ voters, just one month after those voters provided CEOs and investors with a massive tax cut.

Before the proposal, Americans’ wages were set to rise as the tax-cuts encourage companies to hire more Americans — often by poaching them from rival companies with offers of higher pay. This tight labor market is bad for CEOs and investors, but it great for GOP candidates and for Trump who need voter enthusiasm to counter the Democrats’ anger at losing in 2016.

That wage-boosting process has begun in a few places, such as at the Super Bowl in Minneapolis. On February 25, for example, Craigslist showed a company offering $740 for three days of “no experience required” work.

But the proposal will likely abort a nationwide wage spike before November. That can happen because employers now know they can keep most of their workers from switching jobs by offering one-time bonuses until the next amnesty floods the market with at least 1.8 million former illegals.

The business-first, Americans-last perspective was frankly admitted by Homeland Security Secretary Kirstjen Nielsen, in a January 25 statement in Davos. She said at 18:15:

This isn’t about limiting legal immigration … [it is about] how can we do it so that it helps both sides – those [migrants] who want to unify their families and the communities and the businesses who need workers, who need skilled workers to come in and help our economy.

One of the four White House deputies who wrote the plan is Marc Short, who worked for the pro-amnesty Koch brothers before he joined Trump. “We are most interested in getting border security,” Short declared in September, without talking about the need to reduce the cheap labor supply that has shriveled income for the President’s supporters. But a tax cut “is essential to us, right now,” Short said.

The betrayal is shown by the proposal’s undercutting of House conservatives who have defended Trump from the Democrats’ claims that he colluded with Russians. Those supporters include Rep. Bob Goodlatte and Rep. Raul Labrador, authors of the Trump-endorsed immigration bill, who are now pushing House Speaker Paul Ryan to help pass their pro-American bill through the House.

By releasing the plan before Goodlatte’s bill gets a vote, “the White House preemptively nukes Trump’s loyal footsoldiers among the House conservatives who stood behind him, thick and thin, who are defending him on the Russia scandal,” said Horowitz. They are “backstabbing them.”

The betrayal was noted by some of his off-the-record House supporters:

Conservatives not reacting well to WH immigration proposal. I asked a conservative aide if they could support a pathway to citizenship for 1.8m Dreamers:

"It shouldn’t. It would be the most foolish thing Republicans could do. Legalizing 1.8 million Democrat voters."

House Rs not happy w/this new WH immigration plan -> "This is the beginning of the end of the GOP majority in the House. In a year when the Democrats impeach Trump, we can point to this moment," one R on the call tells me.

Senior GOP aide tells me of Trump’s framework:
“I think he’s giving away the farm … It doesn’t take a rocket scientist to say we’re going to have a lot of upsets in the primaries now.”https://t.co/4XY62rCMMA

The proposal also betrays the voters, who pulled the lever for Trump when he promised no amnesties, to enforce the laws and promised passage of reforms that would help Americans and their kids prosper after decades of working in a high-immigration, low-wage economy.

“I do not believe we should be granting a path to citizenship to anybody here illegally,” the Texas Republican said in the Capitol. “Doing so is inconsistent with the promises we made to the men and women who elected us” …

“For some reason that to me is utterly inexplicable, we see Republicans falling all over themselves to gallop to the left of Obama in a way that is contrary to the promises made to the voters who elected us,” Cruz said. “We need to honor the promises we made. And that is what I am energetically urging my colleagues to do.”

“The Democrats have a [political] narrative — they are anti-Trump,” said Horowitz. The GOP’s base voted for Trump and immigration reform despite furious opposition from the establishment, he said, and now they will think “I pressed the Republican button ballot and out popped Democratic [amnesty] policies — what’s the point?”

The message of the amnesty plan is “that it is not about doing what is right [for Americans], or about morals or sympathy for foreign nationals,” he said, continuing:

It is simply about [importing] Democratic votes and [subsidizing] Republican business interests. That is it. This is what proves it.

Shocking Harvard poll reveals that the swamp in DC has a very different understanding of bipartisan immigration reform than do the American people.https://t.co/68fePcw4Rp

“There was no reason to do this now,” said Jenks. “What needed to happen was the President to come out strongly in favor of the House bill so that we have one good marker down.”

Heritage Action: “Amnesty comes in many forms, but it seems they all eventually grow in size and scope. Any proposal that expands the amnesty-eligible population risks opening pandora's box, and could lead to a Gang of Eight style negotiation. That should be a non-starter."

The self-mutilation is shown by the group’s willingness to risk a Trump impeachment in 2018.

“The White House has botched the DACA issue, cutting Bob Goodlatte’s House bill off at the knees and making it more likely that either there will be no bill at all or that any final bill the president signs (which is guaranteed to be even weaker than this) will fatally demoralize Republican voters in November,” Krikorian wrote shortly after being briefed on the proposal.

“If the latter happens, the president will be well on the way to joining Andrew Johnson and Bill Clinton in the impeached-but-not-removed club,” he added.

A former aide to Majority Leader noted that the proposal means put Trump has “put his neck out.”

If Dems think they’re pulling this thing considerably to the left, they’ve lost their mind. POTUS put his neck out on this rollout. https://t.co/MSPagqaOaN

Few of Trump’s friends believe the Democrats can resist the temptation to take full advantage of Trump’s exposed neck. “This is the kind of stupidity that Trump used to make fun of,” said Horowitz.

Four million Americans turn 18 each year and begin looking for good jobs in the free market.

But the federal government inflates the supply of new labor by annually accepting roughly 1.1 million new legal immigrants (including roughly 750,000 working-age migrants), by providing work-permits to roughly 3 million resident foreigners, and by doing little to block the employment of roughly 8 million illegal immigrants.

The Washington-imposed economic policy of economic growth via mass-immigration floods the market with foreign labor, spikes profits and Wall Street values by cutting salaries for manual and skilled labor offered by blue-collar and white-collar employees. It also drives up real estate prices, widens wealth-gaps, reduces high-tech investment, increases state and local tax burdens, hurts kids’ schools and college education, pushes Americans away from high-tech careers, and sidelines at least 5 million marginalized Americans and their families, including many who are now struggling with opioid addictions.

The cheap-labor policy has also reduced investment and job creation in many interior states because the coastal cities have a surplus of imported labor. For example, almost 27 percent of zip codes in Missouri had fewer jobs or businesses in 2015 than in 2000, according to a new report by the Economic Innovation Group. In Kansas, almost 29 percent of zip codes had fewer jobs and businesses in 2015 compared to 2000, which was a two-decade period of massive cheap-labor immigration.

Because of the successful cheap-labor strategy, wages for men have remained flat since 1973, and a large percentage of the nation’s annual income has shifted to investors and away from employees.