Video Of Democrat Leaders Pelosi, Biden And Maxine Resurface After They Try To Condemn Riots 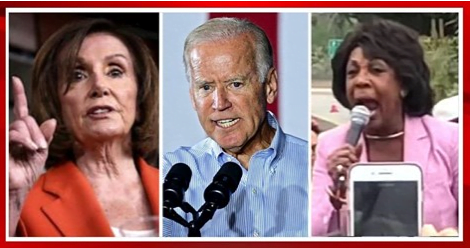 In the past few days, Democrats have tried to make an about-face on the issue of widespread riots.

Now, suddenly, they are condemning the violence “on both sides,” though it is only leftists taking to the streets.

Some even claim they have been against the rioting from the very start.

This newfound sense of law and order also coincides with their big dip in the polls.

They are going to have a hard time explaining away this video, which exposes the truth:

How did you think it would end? pic.twitter.com/AcQVu1NdsF

A new video making the rounds online (with approx. 2 million views as of this writing) reveals that numerous times Democrats and their media allies celebrated the riots.

Nancy Pelosi said she was surprised there weren’t more riots. She later called Trump and Republicans “enemies of the state.”

Numerous media pundits urged people to “take to the streets” and start “uprisings.”

Elected officials continued to call for “movements” in cities like Portland, Chicago, and D.C., where property and businesses were destroyed.

From all appearances, Democrats weren’t just turning a blind eye to the riots—they were egging them on.

Then you have to consider the fact that radical activist group Black Lives Matter—which has been involved in these “uprisings”—is closely connected with the Democratic Party.

Democrat mayors and governors have refused to crack down on the riots. They even promised to defund police departments.

How could Democrats only now suddenly care?

Joe Biden condemned the violence, by accusing Trump and his supporters. Excuse me Joe, but it’s not conservatives waving flags and setting buildings on fire.

They are all leftists.

But now, we are supposed to believe Democrats are on our side?