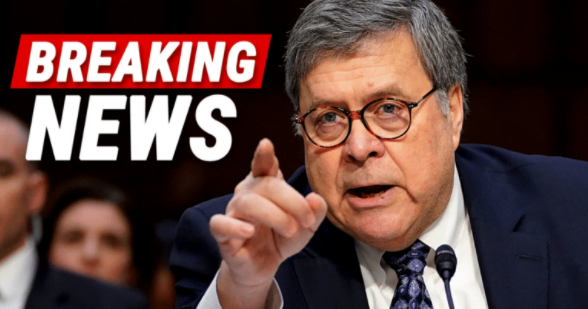 For a long time, years even, the American public has waited for answers regarding those who investigated the Trump 2016 campaign.

Attorney General Barr had promised results from the ongoing Durham probe, which has been elevated to a criminal investigation.

With the election only months away, we’ve seen the first fruits of this investigation.

And Barr has just landed his first guilty plea:

Former FBI lawyer Kevin Clinesmith will plead guilty to making a false statement in the first criminal case arising from U.S. Attorney John Durham’s review of the investigation into links between Russia and the 2016 Trump campaign, two sources close to the matter tell Fox News.

Clinesmith was referred for potential prosecution by the Justice Department’s inspector general’s office, which conducted its own review of the Russia investigation.

Durham’s investigation into the Obama admin’s Russia probe has resulted in its first prosecution.

Back when the Inspector General released his own report on the Russia probe, he revealed that an FBI lawyer altered an email used in the FISA application process.

Someone within the FBI altered information, providing false information, in order to get the warrant to spy on Carter Page.

We now know that lawyer was Clinesmith. According to the latest report, he changed an email to Page was “not a source” for another agency.

When the FBI knew that Page was a source for the CIA.

Had the FISA court known Page was working with the CIA, it would not have been likely for them to approve the warrant.

After all, Obama’s FBI was trying to make it look like Trump’s campaign was scheming with Russia. But if their one suspect was actually a CIA asset? Then their narrative goes out the window.

It seems like Clinesmith altered the email to get the warrant.

But the question remains, who was behind all this? Would Clinesmith have done this all on his own? Is it really probable that one lawyer would have altered this information and the rest of the agency working on this case not know about it?

Barr promised something today. He said it would not be “earth-shaking” but it would prove the investigation is continuing.

With Clinesmith pleading guilty it leads to new questions. Will he cooperate with Durham and provide more information?

What else do Barr and Durham know?

And, perhaps most importantly, who’s next?