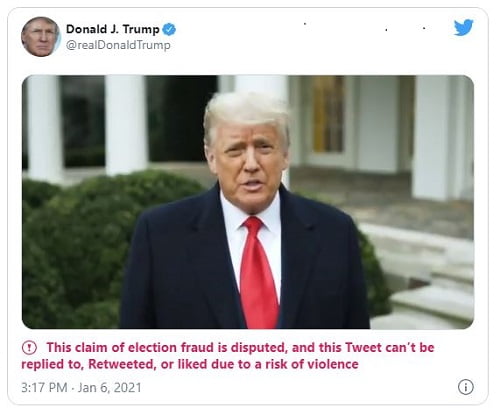 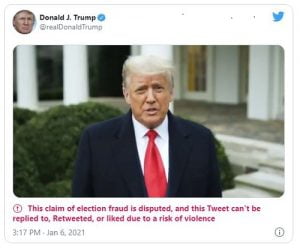 Twitter has disabled the account of President Donald Trump after deleting recent posts made by the president, including a video of him calling on protesters who had gathered on Wednesday at the U.S. Capitol building in Washington to go home in peace.

“As a result of the unprecedented and ongoing violent situation in Washington, D.C., we have required the removal of three @realDonaldTrump Tweets that were posted earlier today for repeated and severe violations of our Civic Integrity policy,” a Twitter announcement reads.

“This means that the account of @realDonaldTrump will be locked for 12 hours following the removal of these Tweets. If the Tweets are not removed, the account will remain locked,” the announcement continues. “Future violations of the Twitter Rules, including our Civic Integrity or Violent Threats policies, will result in permanent suspension of the @realDonaldTrump account.”

Facebook was first to remove the video, which was up for just a few hours on late Wednesday afternoon.

A Facebook spokesperson said in a statement to new outlets, “The violent protests in the Capitol today are a disgrace. We prohibit incitement and calls for violence on our platform. We are actively reviewing and removing any content that breaks these rules.”

Guy Rosen, Facebook’s vice president of integrity, said in a statement, “This is an emergency situation and we are taking appropriate emergency measures, including removing President Trump’s video. We removed it because on balance we believe it contributes to rather than diminishes the risk of ongoing violence.”

Trump had not called for violence in his speech.

Prior to the removal of the video, Facebook applied a label to the president’s video that linked to its “Voting information center,” which shows Democratic presidential candidate Joe Biden as the winner of the November 2020 election. The Facebook label at the time read: “The US has laws, procedures, and established institutions to ensure the integrity of our elections. Get Accurate Election Info.”

Twitter removed the same video from its platform within an hour later of Facebook’s video removal, replacing the post with the message, “This Tweet violated the Twitter Rules,” and linked to the platform’s “enforcement options” page.

Twitter also removed a message from the president posted at 6:01 p.m. ET that read, “These are the things and events that happen when a sacred landslide election victory is so unceremoniously & viciously stripped away from great patriots who have been badly & unfairly treated for so long. Go home with love & in peace. Remember this day forever!

“I know your pain, I know you’re hurt. We had an election that was stolen from us. It was a landslide election and everyone knows it, especially the other side,” the president said in the now-removed video.

“We don’t want anybody hurt. It’s a very tough period of time. There’s never been a time like this where such a thing happened where they could take it away from all of us—from me, from you, from our country,” he added.

“This was a fraudulent election but we can’t play into the hands of these people. We have to have peace. So go home, we love you, you’re very special. You’ve seen what happens, you’ve seen the way others are treated that are so bad and so evil. I know how you feel. But go home, and go home in peace.”

The U.S. House and Senate temporarily halted the joint session of Congress on Wednesday after protesters breached the Capitol building, which interrupted concurrent debates in the two chambers over an objection to the counting of a slate of presidential electors from Arizona for Biden. The session has since resumed.