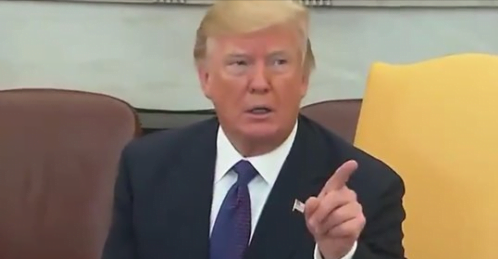 MADISON – President Donald Trump is seeking a recount of ballots in Dane and Milwaukee counties, hoping to overturn the state election results in his favor despite those voters choosing President-elect Joe Biden by wide margins.
Trump’s campaign paid the state $3 million and filed a petition for the partial recount on Wednesday, according to the Wisconsin Elections Commission.

“We will not stop fighting for transparency and integrity in our electoral process to ensure that all Americans can trust the results of a free and fair election in Wisconsin and across the country,” said a statement from Troupis, who has long been active in Republican politics.

Trump would have had to pay nearly $8 million to conduct a full statewide recount of Wisconsin, a state he narrowly lost two weeks ago by nearly 21,000 votes. But state laws allow a more targeted approach to be used.

The official canvass of votes in the Nov. 3 election showed a 20,608 vote difference between Trump and Biden.

A change of that many votes in a recount — especially a partial one — is considered a longshot at best. But the recount gives Trump the opportunity to pursue legal challenges that he could try to use to throw out large numbers of ballots.

To win the presidency, Trump would also need to turn other states in his favor. A state-ordered recount is already underway in Georgia.

The petition, signed by Trump and Vice President Mike Pence on Monday, alleges “mistakes and fraud” were committed all over Wisconsin but particularly in Madison and Milwaukee, cities with large numbers of voters for Biden. The petition does not provide specific examples of mistakes or fraud.

Trump claims his campaign’s observers at Milwaukee’s central counting facility were required to stay 30 to 35 feet away from tables where ballots were being counted and that once his observers are closer to the counting, mistakes and fraud will be found.

A recount in Milwaukee County is estimated to cost about $2 million, according to the state Elections Commission. Dane County would cost about $740,000.

In Milwaukee County, Biden beat Trump 317,270 votes to 134,357, according to the final canvass. The county canvass added 19 votes for Biden and 2 for Trump compared to the unofficial results.

Together, Dane and Milwaukee counties represent more than third (35%) of Biden’s statewide vote.

The recount would give the Trump campaign a chance to raise issues that Republicans have groused about in recent weeks.

In his recount request, Trump argued he wanted to throw out absentee ballots in cases where clerks filled in the addresses of witnesses, a practice that clerks have engaged in for four years. He also wants to toss ballots from voters who called themselves indefinitely confined if they do not actually meet that definition. Indefinitely confined voters do not have to provide a copy of an ID to get an absentee ballot, as other voters must.

In his farthest-reaching request, Trump asked to discount the votes of those who did not submit a written application for an absentee ballot — including for those who voted early in person during the two weeks before Election Day.

That would invalidate more than 60,000 votes in Milwaukee County alone, according to the Trump campaign.

Democrats said they were confident the outcome in Wisconsin would not change.

“The official canvass results reaffirmed Joe Biden’s clear and resounding win in Wisconsin after Wisconsin voters turned out to cast their ballots in record numbers. A cherry-picked and selective recounting of Milwaukee and Dane County will not change these results,” Biden spokesman Nate Evans said in a statement.

Dane County Clerk Scott McDonell said he expected Biden to pick up votes in a recount in his heavily Democratic county.

Sometimes votes that aren’t counted on Election Day get added to the totals in a recount, such as when someone voted for a candidate and also wrote in that same candidate’s name on the ballot, he said. In that case, a counting machine might reject the ballot on Election Day because it would see it as two votes for the same office, but it might get counted in a recount because poll workers would be able to ascertain the voter’s intent.

McDonell said he has not seen any major problems with the election.

“This was a really clean election from our point of view,” he said.

Francesca Hong of Madison, a Democrat who was recently elected to the state Assembly, said seeking a recount in the counties with the majority of the state’s Black residents is “the most blatant and racist form of voter suppression.”

“For the WI GOP to continue congratulating and thanking 45 is sickening,” Hong tweeted about Wisconsin Republicans’ continued support of Trump’s efforts to cast doubt on the election system. “There will be no evidence of voter fraud only voter suppression.”

Milwaukee County Clerk George Christenson on Wednesday told the Journal Sentinel that the county is ready to perform a recount at the Wisconsin Center, which offers enough room for social distancing.

The county’s plan is to set up on Thursday, assuming the Wisconsin Elections Commission orders a recount after it meets at 6 p.m. Wednesday.

Christenson said the recount would take 300 to 400 poll workers and staff to perform, and the building would be prepared to handle observers as well.

The county hopes to finish the recount before Dec. 1, the day the state is slated to certify the vote total, Christenson said.

Christenson said each municipality is responsible for conducting the recount for their reporting units and as far as he is aware the municipalities are prepared with enough poll workers.

Ballots cast on Nov. 3 will again be counted by machines that tally votes.

“We will be ready to proceed as safely and as efficiently as possible,” Christenson said minutes before the Trump campaign announced the county would be one of the places it would seek a recount.

Dane County’s recount will be conducted at the Monona Terrace convention center and will be livestreamed, McDonell said. It will start Friday and will likely take until Dec. 1, he said.

As poll workers run ballots through counting machines, observers for the Trump and Biden campaigns will have a chance to challenge ballots that they don’t think should count. The county’s Board of Canvassers will decide those challenges on a case-by-case basis.

The board consists of a Democrat and a Republican, plus the elected county clerk. In Dane and Milwaukee counties, the clerk is a Democrat. The number of challenges will influence how long the recount takes, McDonnell said.

“There’s only three of us. We can’t duplicate ourselves and that’s a chokepoint,” he said.

He expressed frustration over the Trump campaign’s complaints about witness addresses being filled in by clerks when witnesses don’t write them in themselves.

“Before now, this was not controversial and was bipartisan,” McDonell said.

During or after the recount, lawsuits are possible. Under state law, Chief Supreme Court Justice Patience Roggensack would appoint a judge to hear any cases related to the recount.

The Biden campaign could also request and pay for the remaining wards to be recounted, according to Dean Knudson, a member of the state commission. The Biden campaign would have until two days after the completion of the partial recount to make the request.

Trump has been furiously fundraising for the Wisconsin recount and legal challenges in other states to try to overturn Biden’s victory.

The cost to conduct recounts in 2020 is considerably more than a typical election year because of the coronavirus pandemic. Some counties would need to rent large halls to conduct the recount so they could keep workers and observers distanced from one another, according to Meagan Wolfe, the director of the Elections Commission.

Also driving up the cost are a short time frame and increased security needs, Wolfe said.

When Trump formally requests the recount, the commission’s chairwoman, Ann Jacobs, on Thursday will issue a formal order for affected counties to start their recounts. They will have to begin by Saturday at the latest.

Green Party presidential candidate Jill Stein was able to force a recount in 2016 even though she had claimed just a tiny sliver of the vote. The recount resulted in a net change of 131 votes, upholding Trump’s win that year over Democrat Hillary Clinton by a margin of about 22,000 votes.

In response to the recount, Republican lawmakers overhauled the state’s recount law so that only a candidate who narrowly lost could seek a recount.

Under that revised law, recounts can be held only if the winning margin was 1 percentage point or less. The state covers the cost if the margin is less than 0.25 points. The losing candidate must pay for it if it is more than that.

Trump lost by about 0.6 percentage points, according to unofficial returns.

Alison Dirr and Craig Gilbert of the Milwaukee Journal Sentinel contributed to this report.

You can find out who your legislators are and how to contact them here.