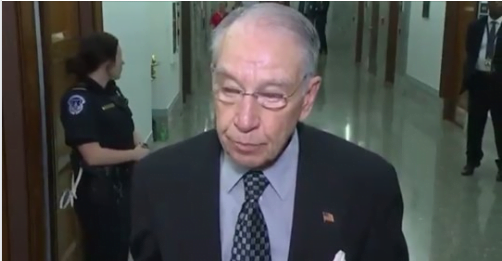 One day after testing positive for the coronavirus, Republican U. S. Sen. Chuck Grassley of Iowa said he’s “symptom-free” and continues to feel good.

“I remain symptom free & in isolation. I continue to feel good Thx for all the messages of encouragement & prayers,” Grassley wrote in a tweet Wednesday afternoon.

Grassley is isolating at his Washington, D. C.-area house on his doctor’s orders after announcing Tuesday evening that he had tested positive for the virus.

Grassley has not said where he believes he was exposed to the virus. He was most recently in the Senate on Monday, where he made remarks on the floor without a mask on and spoke with colleagues while wearing a mask. He also attended a meeting with Senate Republican leadership on Monday, which includes Senate Majority Leader Mitch McConnell.

McConnell addressed Grassley’s diagnosis in remarks on the Senate floor Wednesday morning. He praised Grassley for setting the Senate record of 27 years without missing a single..

I remain symptom free & in isolation. I continue to feel good Thx for all the messages of encouragement & prayers

Schumer from Senate floor on Grassley: "Let me join all of my colleagues in wishing the Senate Pro Tem, the senior Senator from Iowa, Senator Grassley a speedy and quick recovery." pic.twitter.com/mjY1QEbK44