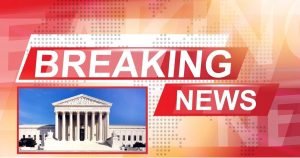 The Supreme Court has been busy this season, rolling out some major decisions. Some of them have impacted states and what they can do to churches during a pandemic.

But in the middle of the 2020 election season, liberals tried to change the critical 2020 census. Now, the Supreme Court has made a decision, in a 6-3 vote.

The Supreme Court ruled 6-3 on Friday to dismiss a challenge to the Trump administration’s exclusion of undocumented immigrants from the U.S. census, the once-per-decade population count used to allocate House seats among the states.

Several states sued the Trump administration over their decision to omit non-citizens in the 2020 census. The results of that decision could impact how many seats each state gets on the House.

So, you can see how many states with, let’s just say, large “undocumented” populations would want to use that to their advantage.

But the Supreme Court voted to dismiss their case because it was premature. After all, the census has not been completed yet, and trying to make a determination over it is just too early.

This ruling, however, also bodes well for efforts to defend the census from attempts to skew it. Liberal states always looking for ways to expand their control over the country.

Their larger populations, however, should not give them greater pull over everyone else. And manipulating the census results to give them an edge in the House is far from democratic.

If the case is brought back to the Supreme Court, after the census is finished, these states might not get the answer they want.

The conservative majority of the court refused to hear them now, they might not want to hear them again later on.