‘We Are Outraged:’ Illegal Alien Activists Turn on Democrats After Amnesty-or-Shutdown Fail 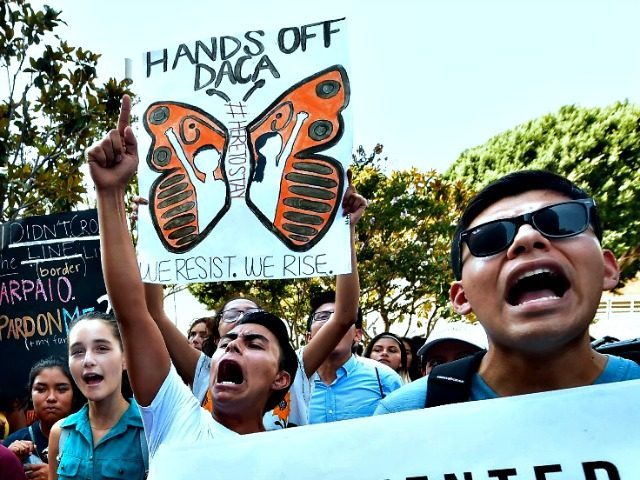 Illegal Alien activists say they are “outraged” after Senate Democrats did not leave the federal government shut down in order to force a deal whereby millions of illegal aliens are given amnesty at the expense of American citizens.

In a protest outside of the U.S Capitol, open borders advocates and illegal alien activists slammed Democrats after they originally shut down the federal government to push amnesty for illegal aliens, but then caved to President Trump and voted to reopen the government without an amnesty attached to the funding bill.

Illegal aliens shielded from deportation by the President Obama-created Deferred Action for Childhood Arrivals (DACA) program with the open borders group “United We Dream,” which is funded by globalist billionaire George Soros, said they were entitled to an immediate amnesty before the federal government was reopened.

“Today we are outraged,” one illegal alien speaker said. “U.S. Senators of both parties disappointed the nation today when they decided to move forward without a solution for me, for the members of United We Dream, and my little sister.”

“We’re not going to sugarcoat it or spin it,” the illegal alien continued. “Today, immigrant young people continue to be in danger of deportation. They continue to be in detention centers. And there was no solution for us today because Democrats and Republicans decided that it was too politically painful.”

Outside the Capitol, immigrant activists say they’re outraged & disappointed by both parties for moving on without a definitive #DACA solution. pic.twitter.com/yxjD5SsaZ2

.@MoveOn’s Ben Wikler: “Democrats caved to Republicans, it’s a disgrace, it’s a failure – but it’s a setback, not a defeat.” pic.twitter.com/QNZ9JTuNSO

Congress votes on a 3 week CR w/out #DreamAct. Dems failed to fight & use their leverage to protect immigrant youth. A false promise to vote on immigration from Rs is not a strategy to win. We won't be fooled. This vote means deportation. Won't stop fighting! #DreamActNow

Under the “Gang of Six” amnesty bill led by Sen. Jeff Flake (R-AZ), Sen. Lindsey Graham (R-SC), and Sen. Dick Durbin (R-IL), at least 3.5 million illegal aliens enrolled and eligible for DACA would be given amnesty, along with their illegal alien parents who brought them to the country illegally.

Additionally, the Flake-Graham-Durbin amnesty would give 50,000 foreign nationals permanent legal status to remain in the U.S. every year, while not ending the process known as “chain migration” or the Diversity Visa Lottery program.

Currently, newly naturalized citizens are allowed to bring an unlimited number of foreign relatives to the U.S. This process is known as chain migration and it has imported more than nine million foreign nationals to the country since 2005, as Breitbart News reported.

In the next two decades, if chain migration is not ended, the legal immigration process will add approximately 7 to 8 million foreign-born voters to the U.S. electorate, Breitbart Newsrevealed.

Likewise, the Visa Lottery, which Trump has demanded an end to, randomly imports 50,000 foreign nationals every year from a multitude of countries, including those with known terrorism problems—such as Afghanistan, Algeria, Egypt, Iraq, Lebanon, Libya, Nigeria, Saudi Arabia, Somalia, Trinidad and Tobago, Venezuela, Yemen, and Uzbekistan.

Most recently, the Visa Lottery made national headlines when it was revealed that suspected ISIS-inspired New York City terrorist, Uzbek national 29-year-old Sayfullo Saipov, who is accused of murdering at least eight individuals, entered the U.S. in 2010 by winning one of the 50,000 visas randomly allotted in the program.

For months now, the Trump administration has been open to negotiating a deal on immigration, with the requirement that chain migration be fully ended, the Visa Lottery be eliminated, and a wall along the U.S.-Mexico border is fully funded. The Republican establishment and Democrats have yet to accept those pro-American immigration reforms as the terms of a deal.