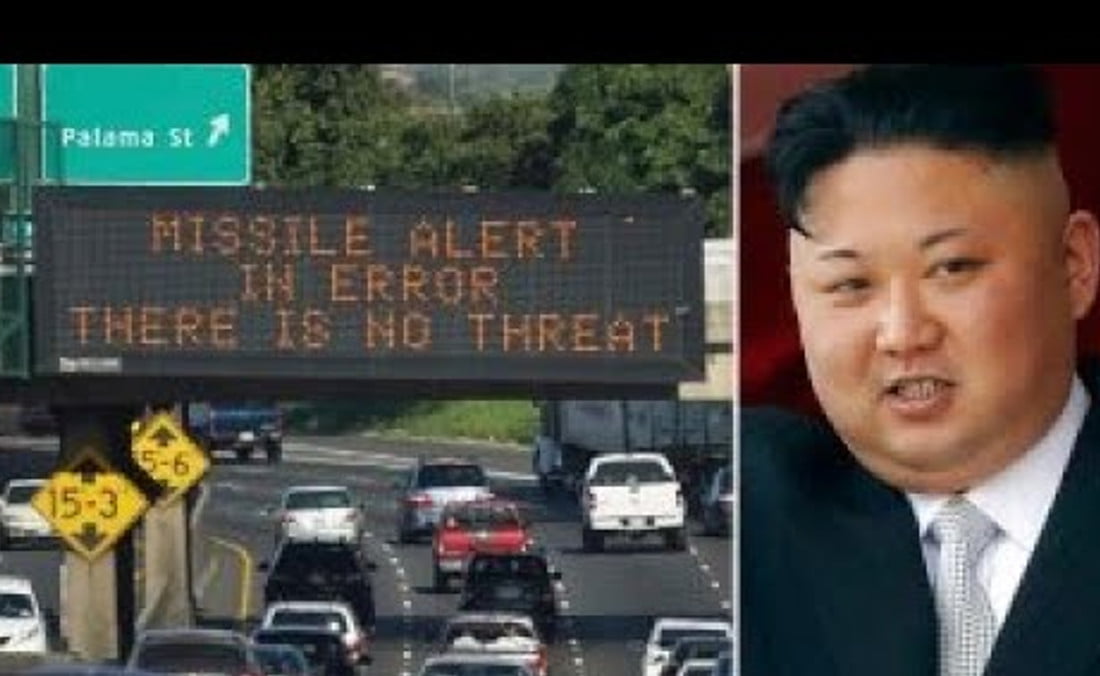 Hawaiians and visiting tourists were startled and frightened by a civil defense warningSaturday that said: “EMERGENCY ALERT: BALLISTIC MISSILE THREAT INBOUND TO HAWAII. SEEK IMMEDIATE SHELTER. THIS IS NOT A DRILL.”

After 38 minutes of frantically trying to find safe cover (some families on Oahu drove to the opposite side of the island to seek shelter in caves in order to try to survive the expected nuclear blast), Hawaiians were told the whole thing was a mistake and there was no imminent missile attack.

Of course, Hawaiians were furious at their state government for this frightening accident.

Much attention was paid to the one state employee who mistakenly selected the wrong computer option during a routine drill following a shift change.

I am extremely worried that we are going to lose one or more American cities in the next decade or two if we do not improve our defensive capabilities. The loss of life would be almost unendurable.

However, all this casting of blame and acceptance misses the real warning inherent in this accidental event: Imagine that the warning had been real. Imagine that there had been one or more missiles equipped with nuclear warheads on the way.

Are we confident we could defend Oahu, the U.S. Pacific Command and all the people on the Hawaiian Islands?

I fear that our defense system could handle no more than two or three missiles before becoming saturated.

In fact, we would need three or four defensive anti-missile launches for each incoming offensive missile to have reasonable confidence that Honolulu would be safe.

To make this defensive challenge even more complex, the North Koreans, like the Chinese and the Russians, are working to develop a submarine-launched missile.

So while the fact that people in Hawaii were frightened by a false alarm is upsetting, our real concern should be ensuring we can keep American cities from being hit by nuclear missiles.

We have been trapped by political timidity, the liberal fantasy that space can be kept free of weapons, and a defense bureaucracy-large corporation-lobbyist complex that wants to focus spending on obsolete programs, using outmoded technologies.

I am extremely worried that we are going to lose one or more American cities in the next decade or two if we do not improve our defensive capabilities. The loss of life would be almost unendurable.

The loss of our freedoms in a very dangerous world would be horrifying.

The requirement that we retaliate forcefully and with comparable nuclear weapons would compound the loss of lives horrendously.

Having an effective defense against any attack has become one of the highest national priorities; however, we have neither a visionary proposal, a practical implementation system, nor a communications program to get the public and Congress to support such an enormous undertaking.

Yet, the failure to act boldly and decisively could eventually lead to the loss of millions of American lives.

Today we have the potential to build a substantial missile defense system that would dramatically increase the safety of the American people.

In the three-and-a-half decades since President Reagan offered a bold, visionary way to break out of the nuclear nightmare, the technologies have improved dramatically.

The Cray-2, which was released two years after President Reagan’s proposal and was believed to be the fastest computer at the time, had the processing power of an iPhone 4.

With this exponential increase in computing power and the emergence of reusable launch vehicles for space, the potential to field a space-based missile defense system is real and eminently rational.

However, the military procurement system and current missile defense bureaucracy are incapable of rapid development and innovation at the speed we need to offset threats from North Korea, Iran and other dangerous regimes.

President Trump should propose a Space Defense Implementation Command with lean procurement rules and entrepreneurial hiring and firing capability. It should operate like Silicon Valley, rather than K Street.

The president should deliver an Oval Office address describing the genuine threat and the horror of what would have occurred if the Hawaii alert had been real.

He should challenge members of Congress to fully fund a multiyear space combat missile defense system precisely as they would a nuclear-powered aircraft carrier.

To save American cities, we need stability in funding, reliability in management and consistent political support built around saving millions of American lives.

Additionally, the Air Force should establish a Space Combat Command designed to wage and win wars in space.

It is abundantly clear that our potential adversaries know how much we rely on space-based assets for communications and intelligence.

It is also clear that if we entered a war with any of these regimes, they would intend to kill or cripple our systems while protecting and – if necessary – renewing their own.

It took only 15 years to go from the Wright Brothers’ first airplane flight to massive military use of air power in World War I.

For the last 61 years (dating from the Soviet launch of Sputnik), we have avoided confronting the reality that space is a domain that will inevitably become an arena for conflict fully as much as land, sea, air or cyberspace.

We need to bring security-focused thinking, doctrines, war games, and technologies to bear to defend American interests in space and Americans wherever they are.

Millions of lives could be at stake.

If fewer than 3,000 casualties galvanized this explosion of effort, what should we be prepared to do to save Oahu’s more than 953,000 residents, the U.S. military personnel assigned there, and the thousands of visiting tourists?

This is what would have been at risk if the Hawaii alert had been real. Next time it may be.

The time to act is now – before a disaster.