Nancy Pelosi, Shaking Her Fist In The Air, Dares To Accuse Trump And Republicans Of “Coming After Your Children” In Troubling Tirade 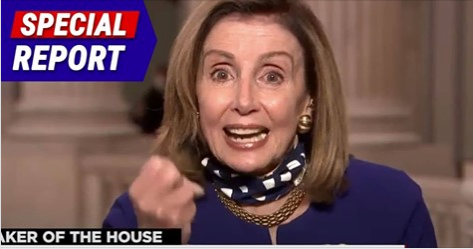 President Trump appears to have enough votes to get a conservative justice to replace RBG.

And it looks like Nancy Pelosi is starting to come apart at the seams.

She has talked about extreme measures to stop the vote, such as impeaching Trump. (Over what?)

Some Democrats have threatened to “pack” the court (good luck with that). Or even add more senators by adding states.

It all appears to be a desperate grabbing at straws. Trump is the president and they just can’t stand it.

But it looks like Nancy is getting even worse.

Now, she’s made a big accusation against Republicans:

Speaker of the House Nancy Pelosi accused Republicans of “coming after your children,” when she appeared on MSNBC on 9/21/2020.

In an attempt to slander Republicans and the Constitutional process of nominating a new justice, Pelosi says conservatives are “coming after your children.”

It appears the Speaker is making wild accusations about what a conservative justice on the court would do to our country.

She is spouting the same left-wing environmental talking points as figures like Greta Thunberg. Pelosi claims a conservative majority on the court would harm our clean air and environment.

But, according to his administration, Trump has put a strong emphasis on helping American children, including investing in school choice—which has provided better education for many.

Pelosi appears to be deliberately inciting fear by saying Trump is “coming after your children.”

How are people supposed to interpret that? We’ve seen how leftists who buy into Democrats’ rhetoric responded in the past.

It never ends well. Your words have consequences in our cities, Madame Speaker.

Do you even care? It doesn’t appear so.

President Trump and Senate Republicans are only doing what is Constitutionally required of them.

Pelosi doesn’t even have a say in the process, being in the House, not the Senate. So, she resorts to harmful comments that do not help anyone.

Her choice of words is especially ironic, considering Trump is likely to replace pro-choice RBG with a pro-life justice, someone who will actually fight to save children’s’ lives.

Should Pelosi continue to lead the House of Representatives with this kind of leadership?