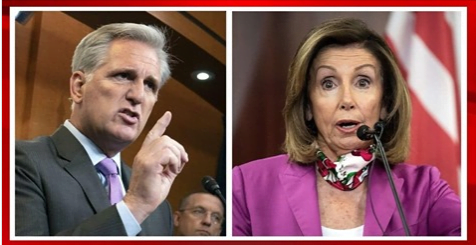 The media isn’t talking about it much, but Democrats suffered plenty of defeats in the House. The 2020 Election wasn’t the blue wave they were hoping for.

In fact, it appears Democrats lost seats as Republicans added. Many of these GOP wins were from first-time female candidates. (So much for liberals being the party of women, huh?)

It has been projected that Democrats will keep a slim majority at 219 seats—perhaps only reaching 221 when all is said and done.

Yet Pelosi claims she won’t back down her plan to force leftist policies onto the United States. Minority Leader Kevin McCarthy may have caught her off guard with this prediction, though:

“So you know what could happen? [Pelosi] could lose as speaker,” he said. “But if she wins as speaker you have AOC and the progressive socialists actually grow. They are fighting among themselves, tweeting at one another, pictures staring at one another, saying it’s a dumpster fire, screaming on their conference calls.”

McCarthy explained the difficult situation Democrats are in.

They might end up with only 221 seats. That’s one of the smallest majorities we’ve ever seen and enough to make their agenda less than certain.

And the Democrats are far from united. The far-left socialists of the party are forcing the moderates (who are most of them) to be silent.

There is no focused goal among the left, just fighting and back-biting. Meanwhile, Republicans are largely united under McCarthy’s leadership and ready to vote as one.

He believes that Republicans will run the floor because their ideas are “stronger” than Pelosi’s.

McCarthy even suggested that as many as 10 or more Democrats will not vote for Pelosi to be speaker.

But even if she ends up as speaker, there are plenty of reasons moderate Democrats will break for Republicans.

Many of the seats lost by the Dems were of moderates who got slammed over the “defund police” movement and other radical goals. Voters viewed all Democrats as supporting these ideas. And moderates refused to stand up to the far-left “squad.”

If they want to keep their jobs this time around, more Democrats have to stand up to the radical left. 2022 is just two years away. We might see enough Democrats work with Republicans just to prevent socialists from ruining their re-election chances.

Not that Pelosi wants that to happen. But if these Democrats want to stay in office, they have no choice.