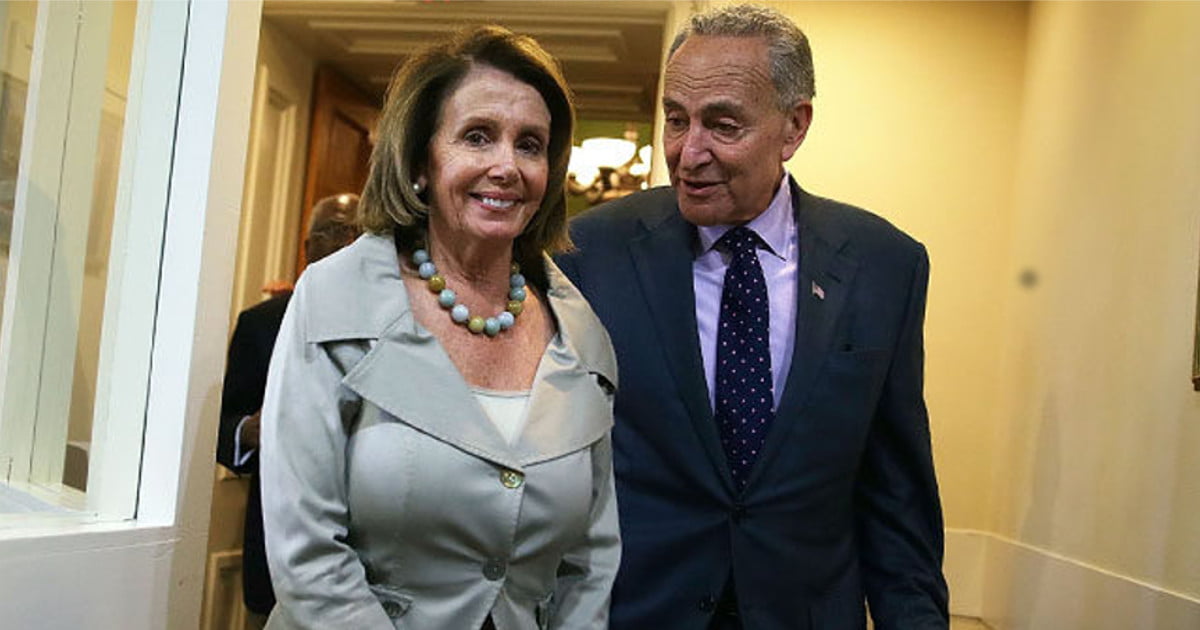 Washington, D.C., is on edge this Friday as Senate Democrats barrel the United States of America toward a government shutdown at midnight.

The House of Representatives, on a bipartisan basis, passed a bill that keeps the government open with 230 votes–and now its fate rests in the hands of Senate Minority Leader Chuck Schumer and his Senate Democratic conference, who would be solely responsible for a government shutdown if it happens. The Senate overwhelmingly on Thursday evening voted for a motion to proceed onto the bill, but now the funding measure needs 60 Senators to vote for it to eventually pass. Since only 47 Republicans are definitely yea votes, that means Republicans need at least 13 Senate Democrats to vote to fund the government.

The Democrats are pushing for this shutdown because they are hellbent on getting amnesty for a significant population of illegal aliens who were recipients of the unlawful Barack Obama-era Deferred Action for Childhood Arrivals (DACA) executive amnesty program. The White House and congressional Republicans have been more than willing to offer a deal and proposal to handle this problem, but the Democrats have been unwilling to give up chain migration, the visa lottery, and funding for President Trump’s planned border wall.

Breitbart News will bring live updates here as the country barrels over the shutdown cliff.

President Trump and Speaker Ryan reportedly spoke recently about potential other options than the House-passed bill:

Trump/Ryan spoke recently about trying to get an interim CR tonight. Colleague John Roberts rpts Schumer open to 5-day CR, but WH wants a month-long CR to avert a shutdown. WH more optimistic there will NOT be a shutdown

But Senate Majority Whip John Cornyn says to expect a likely vote on the House-passed bill:

Cornyn says Senate will vote on House CR unless a deal is reached. Asked what time we can expect the vote, he says, “I don’t know.”

“I think there will be a vote tonight,” Marc Short says

He’s been ping ponging between Ryan’s office and Cornyn’s office.

Meanwhile, Jeff Flake–a vehemently anti-Trump outgoing senator who was reportedly against the House-passed bill–is now apparently open to it as at least two Democrats, Joe Manchin and Joe Donnelly, are now in favor of it:

.@JeffFlake is “still looking” at the House-passed CR. “There’s very little information floating around. Very little. Not a good sign.”

Senate Majority Leader Mitch McConnell and Senate Minority Leader Chuck Schumer have not spoken all day Friday ahead of the all important vote to keep the government open.

McConnell and Schumer have each been in touch with the WH – but haven’t spoken directly yet today.

Excellent preliminary meeting in Oval with @SenSchumer – working on solutions for Security and our great Military together with @SenateMajLdr McConnell and @SpeakerRyan. Making progress – four week extension would be best!

But on CNN right now, OMB director Mick Mulvaney says “not much changed throughout the day” and that the Senate is moving forward with a cloture vote soon to pass the House-passed government funding bill.

Mulvaney adds the “only way to avoid” any government shutdown is for the Senate to pass the House-passed government funding bill. The Senate could pass that right now, if Democrats vote for a bill that contains nothing they oppose.

Up in Pennsylvania, Sen. Bob Casey (D-PA)–another Democrat facing a tough re-election in a state President Trump won in 2016–is under serious fire for dishonest comments he made about a looming government shutdown the Democrats are aiming to cause.

Casey is attempting to put pressure on Republicans here, but it is Democrats like him–and his leader, Chuck Schumer–who hold the power to keep the government open.

The Republicans control the House, Senate and the Presidency. We are on the brink of a shutdown because they refuse to do the basic work of governing.

We can get all of this done if Republicans just figure out a way to govern their own party, but right now the Repubublicans running the House and Senate don't seem like they could organize a one-car parade.

There are countless more absurd tweets from Casey on his Twitter account. But his inaccurate comments are not going unchecked. Now, Rep. Lou Barletta (R-PA)–a pro-Trump Republican congressman from Central Pennsylvania–is stepping forward to call out his hypocrisy.

“I’m sure Senator Casey knows that Senate rules require 60 votes to pass spending legislation,” Barletta said in a statement released Friday afternoon. “Republicans only hold 51 seats in the Senate. It is impossible to get to 60 without Democrat support. Republicans passed a Continuing Resolution through the House without needing Democratic support, but that can’t happen in the Senate. If at least 10 Democrats don’t come to the table, then those Senators who vote no will be solely responsible for shutting down the government. If Bob Casey votes to shut down the government, Casey will be denying health insurance for more than 342,268 children to protect 4,900 illegal immigrants in Pennsylvania. Pennsylvanians should be furious.”

If Casey moves forward with his plan to vote against the House-passed government funding bill–which contains nothing he or other Democrats oppose–and for a government shutdown, Casey will likely face serious consequences on the campaign trail in 2018.

Democrats’ electoral advantage nationwide, as their party aims to send America into chaos with a government shutdown, is slipping dramatically already.

New NBC/WSJ poll: "The Democratic advantage on the generic ballot is down to six points, compared to 11 points last month."

The Democrats may be seriously overplaying their hands here, right into GOP efforts–and efforts by President Trump–to hold the GOP majority in the House of Representatives in November’s midterm elections. After gubernatorial election wins in November in New Jersey and Virginia, and a shocking special election senatorial victory in Alabama as well as a statehouse election victory in Wisconsin, Democrats looked poised for a big 2018. But Senate Minority Leader Chuck Schumer’s actions here–as well as those of House Minority Leader Nancy Pelosi and other top Democrats–are jeopardizing Democrats’ chances in 2018 in November at the polls.

Now reports are emerging that the red state Democrats in tough re-election battles are struggling so badly with their party’s responsibility for a looming government shutdown that they are working to withhold pay for Congress during a shutdown:

Heitkamp, McCaskill, Tester, Manchin, and Stabenow—all Dems from states that Trump won—are introducing a bill to withhold the pay of members of Congress during a government shutdown

Sen. Jon Tester (D-MT), a red state Democrat up for re-election in 2018 in a state President Trump won big time over Democrat Hillary Rodham Clinton, is under serious fire back home in Montana for his stated plans to vote against the bipartisan House-passed government funding bill. Matt Rosendale, the leading GOP candidate for U.S. Senate in Montana who is likely to face Tester in the November general election, is now slamming Tester for his plans to vote for a government shutdown–something that will hurt Montanans.

“Jon Tester had a chance to work with President Trump to keep the government open and secure funding for the 44,000 Montana children who rely on CHIP. Instead, he will vote with Chuck Schumer and other liberal Democrats to shut down the government,” Rosendale told Breitbart News. “Senator Tester chose to play politics rather than work with President Trump to do what is right for our state. That’s not the Montana way. Our state deserves a senator who means business and won’t put up with these nonsense political games.”