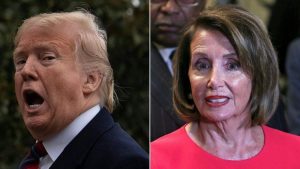 Despite winning the White House, Democrats are determined to throw Trump out of office. Many wonder if this has something to do with preventing him from seeking a second term in the future.

Pelosi and other Democrats are using the events of January 6 as a reason to condemn Trump. They don’t have much time to prepare articles, so it seems they are rushing through the process.

Instead of using this time to bring the country together, Democrats are doing this. Great job, you guys!

Republicans will not be on board with this move. And even one Democrat in the Senate is speaking out against it.

Sen. Joe Manchin (D-WV) told Fox News on Monday evening that the move by House Democrats to impeach President Donald Trump was “ill advised” and that they know that there are not the votes in the U.S. Senate to convict and remove the president…

“I think this is so ill-advised for Joe Biden to be coming in, trying to heal the country, trying to be the president of all the people, when we’re going to be so divided and fighting again. Let the judicial system do its job,” he continued.

He explained what Pelosi doesn’t seem to understand, that it takes 67 votes in the Senate to remove an impeached president.

They didn’t have the votes last time, what makes them think they’ll have them now?

Manchin explains that they’d need around 19 Republicans to convict him, a longshot no matter how you slice it.

The senator rebuked the House for pushing this agenda, saying it is time for the country to come together and “heal.”

Instead, Pelosi seeks to alienate and upset every last American that voted for Trump. It’s unlikely Trump supporters believe he is to blame for what happened in D.C.

Impeaching him over that may only deepen the divide between right and left. But it doesn’t seem like Pelosi cares too much about that.

Even if they pass their impeachment article, it won’t be brought up by the Senate until January 19 at the earliest.

They might vote on it when Trump is already out of office. So, is it really worth the trouble?