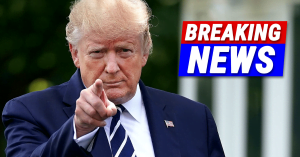 With his Twitter account shut down, President Trump has done little communicating with the country. He could have released statements via his office—or other channels—when Democrats stirred up attempts to force him out.

Instead, he was oddly quiet.

Democrats have tried to get Pence to use the 25th Amendment against Trump. House Democrats are desperately trying to cobble together an impeachment.

Now, Trump is boldly speaking out about what he thinks is going on.

“We want no violence, never violence, we want absolutely no violence,” said Trump. “On the impeachment, it’s really a continuation of the greatest witch hunt in the history of politics.” The impeachment effort, he said, is “causing tremendous anger.”

As he was leaving the White House on Tuesday, Trump stopped to answer questions from reporters.

He commented on the attempts by Democrats to remove him from office, although he only has days left in his administration.

Trump condemned the efforts, saying it was a continuing of the “witch hunt” that they have been leading for years.

The president is referring back to the previous impeachment attempt from 2019, as well as the long-running Mueller probe—which sought to prove he colluded with Russia.

Trump has long maintained these attempts to remove him from office were “witch hunts” and unjustly led.

It is unlikely the current attempt to impeach and remove Trump will succeed. Even if Pelosi rushes articles through the House—they are all but DOA in the Senate.

The Senate is not to resume normal meetings until January 19—one day before the Inauguration. Even then, it would require 67 votes to convict Trump—meaning a significant number of Republicans would have to vote for it.

The attempt to impeach an outgoing president is bizarre, but not surprising for this group of Democrats. Since his first day in office, they have opposed Trump.

They first impeached him over a phone call—now they are blaming him for something others did.

Even when he’s out of office, will they be happy? I truly doubt it.