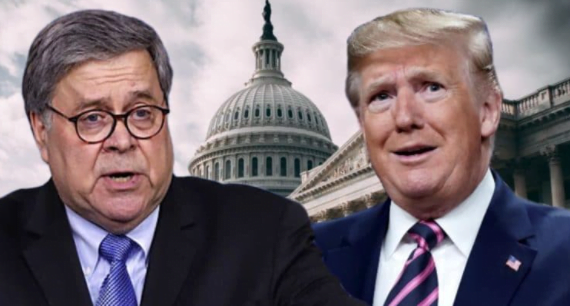 Attorney General Barr just shot down Trump’s hopes that he would charge Obama or Biden.

Many other members of Obama’s administration are in the process of being subpoenaed. Yet, both the former president and vice president aren’t on the list.

I’m sure this frustrates many patriotic Americans. Including President Trump.

“I think it’s just a continuation of a double standard. I am surprised by it,” the president continued.

President Trump said he was “surprised” that Barr will not conduct a criminal investigation against Obama or Biden.

Trump called it a “continuation of a double standard.”

Just think about it. Obama’s DOJ went after the incoming administration. That was a conflict of interest, considering their opposing parties.

Yet now, we see Barr unwilling to do the same—because it might look corrupt? Sounds like a double standard, huh?

Trump has been railroaded for years over flimsy accusations. But we have legitimate concerns about Obama’s DOJ—and the former president won’t face scrutiny?

But Barr appears to be doing what is right. Imagine what the media would say if Trump’s attorney general went after the former president? During an election year to boot!

Democrats would have a field day—perhaps even portray Obama as some kind of martyr. What would that do to the November election?

Is it fair? Is it right? Probably not. But that’s what you get when the media and Democrats are in cahoots.

Time and again we see Democrats skirt out of trouble. Even when there are smoking guns, it appears liberals largely avoid the consequences of their actions.

Meanwhile, it seems Republicans are crucified for doing nothing wrong (i.e.: Trump, Flynn, Kavanaugh, and more).

The silver lining is that the DOJ and the Senate are looking into “Crossfire Hurricane.” They will discover answers we have been demanding for years.

Perhaps more will be discovered, forcing them to investigate Obama and Biden, anyway.

SHARE if you want Barr to get to the bottom of this.