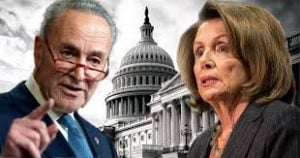 Even though Democrats seemingly got what they wanted—Joe Biden in the White House—their actions over the last few months prove they are not happy.

They have been working on some pretty unheard-of plans to get Trump out of office ASAP. In fact, one of their plans seems to have nothing to do with getting him out before January 20.

Instead, it seems they are trying to stop him from running again—the earliest in 2024.

But one ex-federal judge just sank their battleship.

Michael Luttig, a former judge of the U.S. Court of Appeals for the 4th Circuit, wrote an op-ed in The Washington Post on Tuesday arguing that holding Trump’s impeachment trial after he is already out of office is unconstitutional…

“Once Trump’s term ends on Jan. 20, Congress loses its constitutional authority to continue impeachment proceedings against him — even if the House has already approved articles of impeachment.”

Luttig believes that, according to the Constitution, Congress “loses its constitutional authority” to pursue impeachment hearings once Trump’s term ends.

ANd that’s even if the House approves articles of impeachment prior to that day.

The former judge points to the Constitution itself. The Impeachment Clauses only give Congress the power to convict a sitting president. It says nothing about their power to go after a former President once he leaves office, at least not with the tool of impeachment.

But will that prevent the House or Senate from pursuing this doomed agenda? Never count Pelosi and her party out, when it comes to hairbrained schemes.

Many have already pointed out that the Democrats do not have enough votes in the Senate to convict Trump. Even if they could continue the hearings after January 20, it is unlikely 67 senators will vote against the president.

If these proceedings are considered unconstitutional, it might even open up a path for Trump and his legal team to bring it before the courts. They could argue Congress is violating the law to convict him after he’s out of office.

We’re not sure how this will all shake out, but it looks like Luttig just spoiled the Democrats’ party. So, the question now is, why are they doing this—when they could otherwise do something to help Americans?

That’s a question only they can answer.