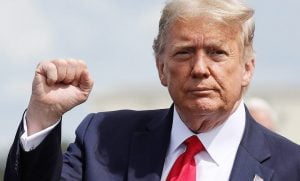 President Donald Trump has faced tremendous backlash after the Capitol Hill riots last week. Now, several members of his own party are standing against him.

A total of six Republicans have already announced their support for impeachment. There were only a few last week but that number has now swelled, and more could join in before the official vote.

This marks a disturbing switch in the impeachment narrative.

When Democrats attempted to remove Trump before, they faced a strong partisan wall: almost nobody on the Republican side agreed with the charges, as most GOP members sided with the President.

This time, though, the situation isn’t quite so black-and-white.

House Republican Chair Liz Cheney has already revealed her intention to vote for impeachment. And now, 5 more Republicans have joined her.

The list is bound to anger right-wing individuals and Trump supporters around the country (via Fox News):

Six Republicans have said they will vote to impeach President Trump on Wednesday.

Recently, Newhouse said he’d vote to impeach on the House floor. He claims the President “did not strongly condemn the attack nor did he call in reinforcements.”

Herrera Beutler chimed in, saying Trump “incited a riot to halt the peaceful transfer of power,” and Upton made a similar statement on Twitter:

The Congress must hold President Trump to account and send a clear message that our country cannot and will not tolerate any effort by any President to impede the peaceful transfer of power from one President to the next. Thus, I will vote to impeach. pic.twitter.com/NqxyoB4ncv

Katko added that Trump “encouraged” the insurrection in Washington D.C. on both social media and in his speech.

As for Cheney, she believes the President “summoned this mob, assembled the mob, and lit the flame for this attack.” And Kinzinger has been aboard the impeachment train from the start.

But Pence has since rejected that plan, so Kinzinger and others are now resorting to an impeachment vote. Though, some believe they just don’t have enough votes to get Trump out.

If it does happen, however, Trump will be the only President in U.S. history to be impeached twice (but the motion didn’t pass through the Senate the first time).