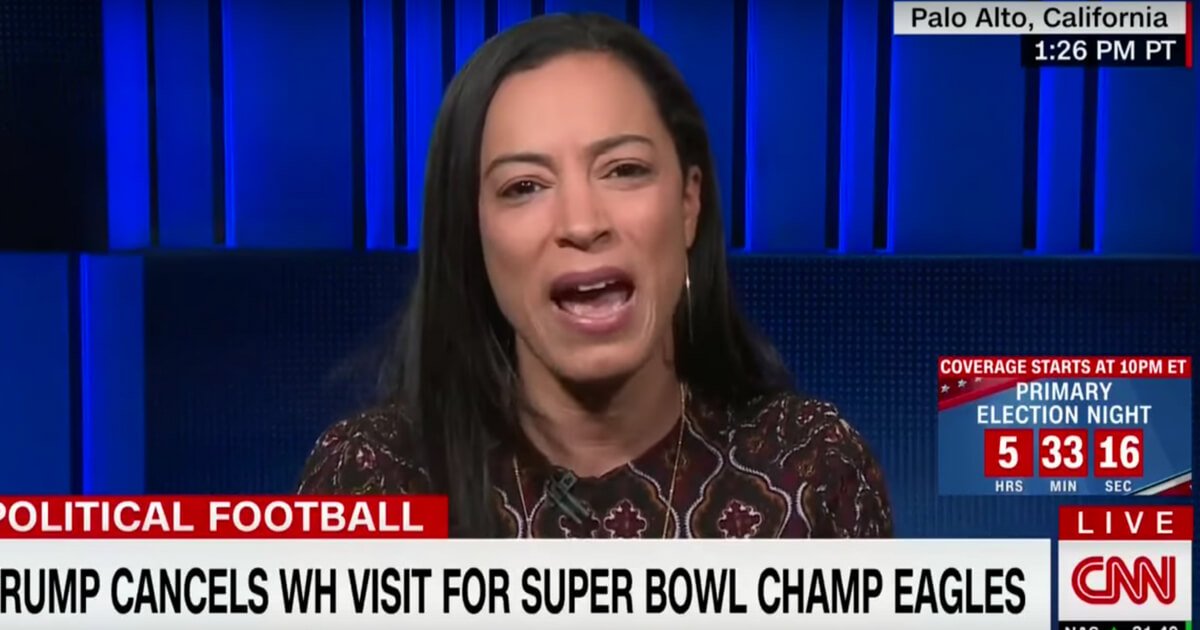 The controversy surrounding NFL players and the national anthem has once again reached a fever pitch, this time with a CNN commentator calling the beloved anthem “problematic, in and of itself.”

The comment stemmed from a discussion on CNN’s “The Lead” with host Jake Tapper about President Donald Trump’s decision to disinvite the Philadelphia Eagles for a scheduled White House celebration of their Super Bowl victory.

The Eagles team and staff were scheduled to visit the White House on Monday, but it was announced at the last minute that only a handful of players and coaches planned to participate in the event after some players decided their opposition against the supposedly “racist” president was greater than the honor of visiting the people’s White House to celebrate their victory.

Thus, Trump canceled the event and immediately replaced it with an impromptu “Celebration of America,” replete with patriotic music performed by a military band and choir for those who had come to congratulate the Eagles.

Angela Rye, a liberal political commentator who once served as an attorney for the Congressional Black Caucus, began her portion of the discussion by smearing the president as someone who has “trafficked in bigotry, xenophobia and racism” since the very start of his political career.

She then suggested that the canceled Eagles visit had less to do with the national anthem controversy and more to do with Trump’s ego, as she suggested he simply couldn’t bear to be seen with a small crowd.

“That’s what he can’t handle. The ego blow,” Rye said. “This is all about his ego, and we are now going to end up in a midterm where we’re talking about the national anthem.”

“The national anthem is problematic in and of itself,” Rye continued. “There’s a second verse that Colin Kaepernick brought attention to that has yet to be discussed on broad platforms.”

The line referenced by Rye, which is actually found in the third verse of the national anthem, states, “No refuge could save the hireling and slave / From the terror of flight or the gloom of the grave.”

According to the Washington Examiner, Rye’s mistaken statement of which verse of “The Star-Spangled Banner” that has been construed by some as “problematic,” is actually emblematic of how controversy can be easily sparked among those who fail to understand the concept of context.

The line in question came from Francis Scott Key’s poem, “Defence of Fort M’Henry,” which has been adapted into the national anthem, though only the first verse of that song is typically sung at events.

In that third verse, Key referenced the defeat of a British military unit known as the Colonial Marines, a collection of escaped slaves conscripted by the British Army to engage in battle with American militia units during the War of 1812, though others believe Key may have simply been referencing slaves at the fort who were unintentionally killed in the chaos of a raging battle.

It had nothing to do with our nation’s “racist” founders purposefully slaughtering actual slaves, as some of the perpetually offended folks on the left would have everyone believe.

The national anthem is a celebration of how our young nation overcame great odds to emerge victorious against a much more powerful enemy and its message is one that should provide inspiration to all.

Unfortunately, there are those individuals — like this CNN commentator — who simply fail to understand the context behind historical events and are too quick to slap the label of “racism” on anything they don’t agree with or fully comprehend.