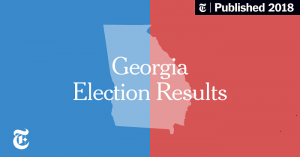 One of the reasons that folks on the right have been so upset over the Nov. 3 election is not just that many believe it was stolen from President Donald Trump, but also the concern that if you don’t fully answer/resolve the questions that have been raised about the election, then you can’t be assured that it won’t happen again.

A recent USA Today poll found that fully 78% of Republicans don’t believe that Joe Biden was legitimately elected. While the media wants to blame that on President Donald Trump, as indeed they blame everything, it has far more to do with the media failure to actually address the questions raised, dismissing sworn affidavits and the failure to comply with state laws. That’s a big issue when you fail to address the concerns of that many people.

Now, as we approach the Georgia run-offs, Fox is reporting that we may not know the winners in the run-offs for “weeks.”

Georgia Senate runoffs may not be decided for weeks https://t.co/1LmNMFKANS pic.twitter.com/s95nxMnvzG

Election officials in Georgia are gearing up for the possibility that next month’s Senate runoff elections may spend weeks in litigation before a final winner is determined.

The state has become closely divided in recent years and both Democrats and Republicans expect the results to be razor-thin.

Until just enough ballots come in to declare Democrats the winners?

“Given what happened after the presidential election, I wouldn’t at all be surprised to see attempts to challenge the results, especially if Democrats win,” Emory University political scientist Alan Abramowitz told the Atlanta Journal-Constitution. “We’re already seeing questions about signature verification, challenges of new voter registration. This could all just be a glimpse of the future.”

“This is no run-of-the-mill runoff. The fate of the nation’s balance of power Is on the table here,” political strategist Brian Robinson said. [….]

“What we have seen traditionally in Georgia that Republicans are much more reliable runoff voters than Democrats are. The republican have a pretty long string of unbroken wins in statewide runoffs,” he said. “They want to make sure Democrats don’t control every level of power in Washington. That’s a very powerful motivator. Democrats are fat and happy because they got what they want in Washington.”

That may be true traditionally. But we’ve seen a whole lot of “traditions” broken with this past election. Not to mention, Democrats are pouring all kinds of money and effort into the state to flip the Senate blue to control all branches of the government if they can. If they manage that, then yes, prepare for even more traditions to be broken with all the things that they would do to harm the country. So, Republicans had better be prepared to deal so you don’t get the same thing once again — a run of ballots coming in to overwhelm the likely GOP lead.
Source: republicanstory.com
Share on Facebook Share
Share on TwitterTweet
Share on Pinterest Share
Share on LinkedIn Share
Share on Digg Share