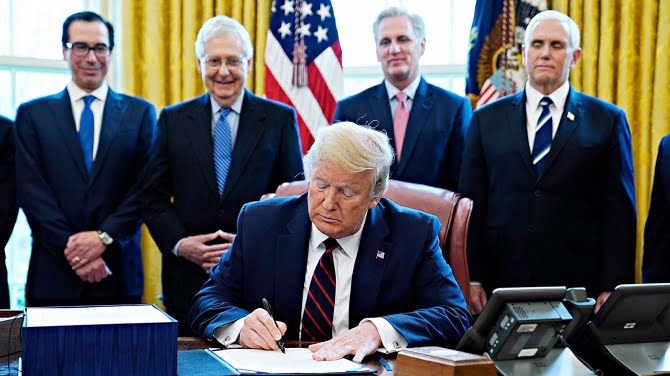 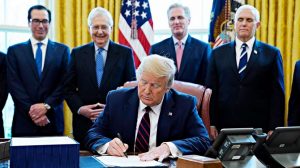 Trump’s signing of the bill, which includes a $900 billion COVID-19 relief package, means a partial government shutdown is now averted, while financial aid for Americans will be delivered.

“As President of the United States it is my responsibility to protect the people of our country from the economic devastation and hardship that was caused by the China Virus,” Trump said in a statement.

“I am signing this bill to restore unemployment benefits, stop evictions, provide rental assistance, add money for PPP, return our airline workers back to work, add substantially more money for vaccine distribution, and much more.”

He added that “more money is coming” and vowed to “never give up” his fight for American people.

This comes following a delay due to Congress’s failure to meet Trump’s demand to increase stimulus checks from $600 to $2,000 per person. Trump had repeatedly expressed dissatisfaction over what he describes as “wasteful” spending in the bill while Americans continue to struggle due to pandemic lockdowns.

Although the bill, passed by both houses of Congress earlier this week, was sent to the White House on Christmas Eve, Trump did not immediately act on it but instead pressured lawmakers to revisit portions of the omnibus bill that sends funding to foreign and domestic programs.

This story is developing. Please check back for updates.

Read the president’s whole statement on the signing of the bill here:

As President of the United States it is my responsibility to protect the people of our country from the economic devastation and hardship that was caused by the China Virus.

I understand that many small businesses have been forced to close as a result of harsh actions by Democrat-run states. Many people are back to work, but my job is not done until everyone is back to work.

Fortunately, as a result of my work with Congress in passing the CARES Act earlier this year, we avoided another Great Depression. Under my leadership, Project Warp Speed has been a tremendous success, my Administration and I developed a vaccine many years ahead of wildest expectations, and we are distributing these vaccines, and others soon coming, to millions of people.

As President, I have told Congress that I want far less wasteful spending and more money going to the American people in the form of $2,000 checks per adult and $600 per child.

As President I am demanding many rescissions under the Impoundment Control Act of 1974. The Act provides that, “whenever the President determines that all or part of any budget authority will not be required to carry out the full objectives or scope of programs for which it is provided, or that such budget authority should be rescinded for fiscal policy or other reasons (including termination of authorized projects or activities for which budget authority has been provided), the President shall transmit to both Houses of Congress a special message” describing the amount to be reserved, the relevant accounts, the reasons for the rescission, and the economic effects of the rescission. 2 U.S.C. § 683.

I will sign the Omnibus and Covid package with a strong message that makes clear to Congress that wasteful items need to be removed. I will send back to Congress a redlined version, item by item, accompanied by the formal rescission request to Congress insisting that those funds be removed from the bill.

I am signing this bill to restore unemployment benefits, stop evictions, provide rental assistance, add money for PPP, return our airline workers back to work, add substantially more money for vaccine distribution, and much more.

On Monday the House will vote to increase payments to individuals from $600 to $2,000. Therefore, a family of four would receive $5,200. Additionally, Congress has promised that Section 230, which so unfairly benefits Big Tech at the expense of the American people, will be reviewed and either be terminated or substantially reformed.

Likewise, the House and Senate have agreed to focus strongly on the very substantial voter fraud which took place in the November 3 Presidential election.

The Senate will start the process for a vote that increases checks to $2,000, repeals Section 230, and starts an investigation into voter fraud.

Big Tech must not get protections of Section 230!

Voter Fraud must be fixed!

Much more money is coming. I will never give up my fight for the American people!