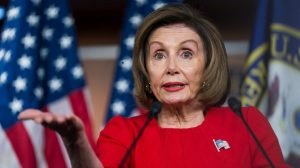 House Speaker Nancy Pelosi (D-Calif.) on Sunday evening said that the House will move forward with a resolution Monday that calls on Vice President Mike Pence to invoke the 25th Amendment in order to impeach the president, just two weeks before his term ends.

In a letter to colleagues, Pelosi said House Democrats will try to pass a resolution that calls on Pence to invoke the 25th Amendment to declare President Donald Trump “incapable” of carrying out his presidential duties.
The Democrats have given Pence 24 hours to act. If the vice president refuses to comply with the Democrats’ demands, the House will consider articles of impeachment over the U.S. Capitol breach. Members of the media, some lawmakers, former officials, and other critics have pinned the blame on Trump for allegedly inciting the riots.
This comes on the same day Rep. Hakeem Jeffries (D-N.Y.), the No. 3 House Democrat, announced that a “privileged resolution will be introduced that will charge” Trump with “inciting sedition.”

Jeffries said that introducing a privileged resolution will allow the House to move “expeditiously” to consider the impeachment article before Jan. 20.

House Democrats, after introducing the article, will then “vote it out” and “send it over to the Senate without having to go through the traditional Judiciary Committee markup.”

However, Democrats’ chances of securing a conviction in the Senate before Jan. 20 appears to be slim.

Senate Majority Leader Mitch McConnell (R-Ky.) on Friday sent a letter to Republican senators about how the Senate could legally “dispose of any articles of impeachment” proposed by House Democrats against President Donald Trump before Jan. 20.

The majority leader noted that “without unanimous consent, the Senate may not conduct any business of any kind during pro forma sessions, including beginning to act on received articles of impeachment from the House.”

Should the House impeach Trump for a second time—which requires a simple majority vote—the Senate will receive a notice that the House impeached the president while the Senate is in recess. According to McConnell, all 100 senators would have to agree to conduct “any business of any kind.”

“Assuming such unanimous consent is not given, the following would take place under the Senate Impeachment Rules when the Senate resumes regular session on January 19,” McConnell wrote, adding that unless both the House and Senate move quickly, the Senate trial would not start until “after President Trump’s term has expired.”

Pelosi (D-Calif.) told her Democratic colleagues to prepare to return to Washington D.C. on Jan. 8, when she discussed options via phone for censuring Trump for the alleged conduct.

“When we take our oath of office, we promise to the American people our seriousness in protecting our democracy. For that reason, it is absolutely essential that those who perpetrated the assault on our democracy be held accountable. There must be a recognition that this desecration was instigated by the President,” Pelosi said in the letter.

Should an impeachment procedure be initiated, Democrats will likely focus on Trump’s speech to protesters on Jan. 6, where he said that the election was stolen and made note of allegations of voter fraud, irregularities, and unconstitutional balloting laws.

“We will never give up. We will never concede,” Trump said. The president, meanwhile, did not tell the protesters to enter the Capitol or use violence—on the contrary, in a twitter video deleted by the platform he told them to be peaceful and to go home, and later denounced the Capitol breach. Critics have claimed that his allegations of voter fraud and irregularities was an incitement to violence.