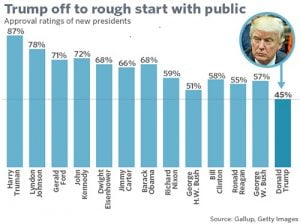 The Democrats and many of the Republicans might hate President Trump more since his speech last Wednesday but polling shows President Trump’s approval has actually gone up amongst Americans.

If you believe the media and most Beltway politicians, the entire country is appalled at President Trump and wants him erased from history.  A moral panic is being pushed by the media and other Democrats in the wake of the incursion into the United States Capitol.  It has been persuasive to the media, including many nominal conservatives.  And it may have convinced many Republican politicians that President Trump is now a marginal figure, at best, and should be shunned.

But unless the Rasmussen polling organization suddenly has become inaccurate after being far more accurate than most presidential polls, the mainstream of conservative America, roughly half the country, isn’t buying it, and Trump’s approval has actually risen

President Trump’s approval at Rasmussen was as follows last week:

No matter what the Democrats and their media do, Americans aren’t buying their BS.