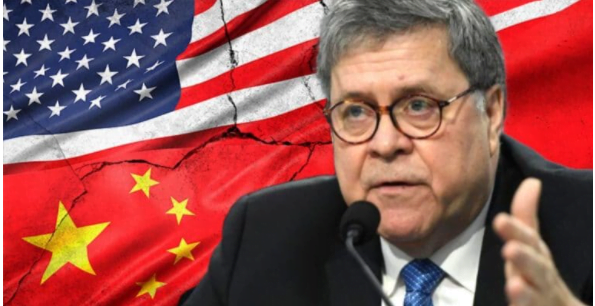 President Trump has been vocal about his criticism towards China throughout the COVID pandemic.

He has set the blame for the massive toll of the disease squarely on China, mainly for how they refused to act quickly to stop the spread.

It appears, though, that instead of trying to make amends, China continues to make things worse.

And the Department of Justice has been forced to take action.

It appears two Chinese hackers tried to steal information about COVID (among other things) from government agencies and American businesses.

The DOJ found these two crooks and are throwing the book at them:

The Department of Justice announced Tuesday it has charged two Chinese hackers with trying to steal U.S. COVID-19 research as well as other sensitive information from businesses and government agencies.

The 11-count indictment against Li Xiaoyu, 34, and Dong Jiazhi, 31, alleges the Chinese nationals hacked into the computer systems of hundreds of companies, government organizations as well as individual dissidents and clergy.

Two Chinese hackers have been caught trying to steal sensitive research into COVID-19 from businesses and government agencies.

In addition, they also broke into accounts of democratic and human rights advocates in the U.S., Hong Kong, and mainland China. That suggests they were also trying to undermine efforts to protect the rights of Hong Kong citizens.

According to the DOJ, they stole terabytes of data from “hundreds of targets.” AG Barr is calling them a “prolific threat” to the country and foreign networks. In one case, these hackers tried to extort cryptocurrency from a victim.

It appears these hackers had no limit in the kind of damage they wanted to inflict on American businesses. They searched for vulnerabilities in companies testing COVID-19 vaccines and treatments. Which suggests they might have been trying to interfere with the United States’ ability to battle the disease.

Attorney General Barr has recently sounded the alarm of China’s growing, destructive influence around the world. He warned American industries that China would use its influence to impose communism in the U.S. and abroad.

This move proves his warnings true. If just two hackers could cause this much damage, imagine what the entire Chinese Communist Party could do?