Barr breaks with Trump: His tweets ‘make it impossible for me to do my job’ 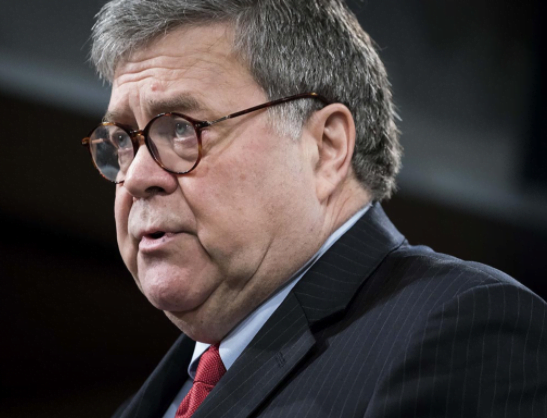 The attorney general’s declaration of independence comes as he and the president have faced blowback over the handling of Roger Stone’s case.

Attorney General William Barr on Thursday sharply criticized President Donald Trump’s prolific Twitter habit, saying that the president’s affinity for opining about the goings-on at the Justice Department “make it impossible for me to do my job.”

“I think it’s time to stop the tweeting about Department of Justice criminal cases,” Barr told ABC News’ Pierre Thomas in an interview, acknowledging that he had a problem with “some” of Trump’s tweets.

Trump lashed out at career prosecutors this week after they recommended up to nine years in prison for Stone, who was found guilty of lying to investigators, obstructing Congress and witness intimidation, prompting the Justice Department to walk back its recommendation a day later and causing four prosecutors to withdraw from the case in protest.

Trump’s public fuming over the Stone case was just one example of how his running commentary on Justice Department matters complicated Barr’s job, the attorney general said on Thursday.

Democrats had immediately seized on the stunning reversal, saying it smacked of political interference, and it renewed calls for Barr to resign. House Speaker Nancy Pelosi, who along with other Trump critics has derisively referred to Barr as the president’s personal attorney, called the move an “abuse of power” by Trump. She echoed Senate Minority Leader Chuck Schumer, who this week called for the department’s independent watchdog to look into the issue.

In Stone’s case, Barr confirmed that he’d personally intervened to walk back the stiff sentencing recommendation, saying he’d been taken by surprise at the initial recommendation. But he maintained that his decision had been made hours before Trump tweeted about the case in the middle of the night, with the president calling the proposed sentence a “miscarriage of justice.”

“Once the tweet occurred, the question is, well, now what do I do?” Barr said. “Do you go forward with what you think is the right decision or do you pull back because of the tweet? And that just sort of illustrates how disruptive these tweets can be.”

He went on to get more explicit in imploring the president to rein in his commentary.

Barr selected one of Trump‘s favorite mediums — television — to deliver his message on Thursday, but Barr‘s displeasure will not come as any surprise to the president, a person familiar with the situation told POLITICO.

“The attorney general had talked to the president a number of times and told him he was getting frustrated with these statements and it was making it challenging for him to work,” said the source, who spoke on the condition of anonymity.

While numerous other Trump Cabinet members have fallen out of favor with the president after tangling with him, White House press secretary Stephanie Grisham said on Thursday evening that Trump wasn‘t troubled by Barr‘s public rebuke. But she stopped short of saying that Trump planned to change his ways.

“The President wasn‘t bothered by the comments at all and he has the right, just like any other American citizen, to publicly offer his opinions,” Grisham said. “President Trump uses social media very effectively to fight for the American people against injustices in our country, including the fake news. The President has full faith and confidence in Attorney General Barr to do his job and uphold the law.”

The benign response from the White House prompted speculation from some quarters that Barr‘s message was aimed more at calming the furor at the Justice Department over the episode than actually scolding Trump.

In the interview, Barr rejected accusations of undue political influence at the department, asserting that Trump had “never asked [him] to take any action in a criminal case” but affirming that he would not bow to any political interference in his department.

Barr flatly denied any discussions with the White House about the Stone case, but in the released portions of the ABC interview, he did not appear to deny that the president had ever discussed specific cases or investigations with him.

Still, he said, Trump’s tweets indicating anything to the contrary added “grist to the mill.”

Trump has repeatedly been accused of trying to weaponize the Justice Department for his political gain, frequently demanding investigations into his perceived foes. And just in recent months, he was impeached in the House — and acquitted in the Senate — on charges that he withheld military aid in an attempt to pressure a foreign leader into conducting politically beneficial investigations.

Just hours before Barr’s interview, for instance, Trump had asserted to the journalist Geraldo Rivera that his “life would’ve been a lot easier” had he chosen Barr over Jeff Sessions as his attorney general from the start, an implication that the department’s since-ended investigation into Trump’s Russia ties would have gone more smoothly for him.

Barr, whose admonishment amounts to a rare split with the boss he has often forcefully defended, said he was prepared for the fallout of airing his criticisms.

“As I said during my confirmation, I came in to serve as attorney general,” Barr told Thomas. “I am responsible for everything that happens in the department but the thing I have most responsibility for are the issues that are brought to me for decisions.

“I will make those decisions based on what I think is the right thing to do, and I’m not going to be bullied or influenced by anybody — whether it’s Congress, newspaper editorial boards, or the president,” he continued. “I’m going to do what I think is right.”

Barr also complained on Thursday of “constant background commentary” that he implied was separate from that of the president. “I cannot do my job at the department” with those kinds of distractions, he said, adding that the noise “undercuts me.”

Some prominent Trump allies seemed to have Barr‘s back on Thursday, gently urging the president to go along with the attorney general’s recommendation to quit tweeting and speaking about pending criminal cases.

But other Trump devotees reacted angrily to the brushback pitch Barr appeared to direct to the president.

“I am so disappointed in Bill Barr. … It‘s a damn shame what he doesn‘t get —what this president has gone through and what the American people have gone through,” the Fox Business host Lou Dobbs said on Thursday night. “I don‘t want to hear any crap about an independent Justice Department. This Justice Department, as does every one, works for the president.”

With Trump painting Stone‘s prosecution as a miscarriage of justice and career prosecutors recoiling at what they view as the politicization of Justice Department decisions, Barr seemed to be continuing to stake out a middle ground, but one that could still irritate Trump.

After Stone‘s conviction last November on all seven felony charges he faced, Trump complained on Twitter that the trial demonstrated “a double standard like never seen before in the history of our Country.” However, Barr told ABC on Thursday that he viewed the Stone case as “a righteous prosecution” and that he was “happy” that Stone was convicted last November.

“I’m not a fan of Roger Stone,” Barr said, even as he criticized the initial seven-to-nine year recommendation as “very, very high and excessive.”

In the new interview, Barr also offered the most detailed account yet of the sequence of events that led to the furor that has roiled the Justice Department.

The two-time attorney general appeared to blame the extraordinary public reversal on a misunderstanding with a former deputy he recently tapped as interim U.S. attorney, Timothy Shea.

“On Monday,” Barr said, “he came by to briefly chat with me and say that the team very much wanted to recommend the seven-to-nine-year [sentence] to the judge, but he thought that there was a way of satisfying everybody and providing more flexibility. … I was under the impression that what was going to happen was very much what I had suggested.”

Barr said he was startled on Monday night when media reports highlighted the prosecution‘s call for Stone to get as much as nine years — a proposal that stemmed from treating as serious threats Stone‘s taunts to another witness. Stone claims those barbs were just bluster and bravado.

The attorney general said he initially thought the press reports were wrong, but soon realized they were correct.

“I said, ‘The news is spinning this, this is not what we were going to do,‘” Barr said. “I was surprised.”

The sentencing filing submitted on Monday did say that “it was appropriate for the court to consider” how the guidelines were affected by the threats whose seriousness is in dispute, but prosecutors‘ bottom line was that a sentence of between roughly seven and nine years “would accurately reflect the seriousness of his crimes and promote respect for the law.”

Barr said the filing did not capture the nuance that he had expected would be conveyed. He said he told his aides Monday night that they needed to clarify the filing with the court, but the 1:48 a.m. tweet from Trump on Tuesday complicated the situation, making it appear that any action Barr took was the product of Trump‘s intervention.

A Justice Department official said on Thursday night that it did not appear that the original Monday night filing was filed through some sort of error, but that Shea reluctantly approved the submission under pressure from the career prosecutors. Shea wanted the original filing to call for less than the seven to nine years the prosecution team favored, but acquiesced after those prosecutors threatened to drop off the case if their recommendation wasn‘t adopted, according to the official.

“He was under pressure from the Mueller prosecutors, who said they‘d withdraw, so he said, ‘OK, do it. … ‘ He signed it,” the official said.

Barr did not blame Shea personally in the interview, but said, “There appears to have been something lost in translation.”

Meanwhile, one Trump tweet triggered by the Stone imbroglio, a swipe at U.S. District Court Judge Amy Berman Jackson, led to an unusual public defense on Thursday from the chief judge of that court, Beryl Howell.

“The Judges of this Court base their sentencing decisions on careful consideration of the actual record in the case before them; the applicable sentencing guidelines and statutory factors; the submissions of the parties, the Probation Office and victims; and their own judgment and experience,” Howell said in a statement. “Public criticism or pressure is not a factor.”