What would make William Barr quit? 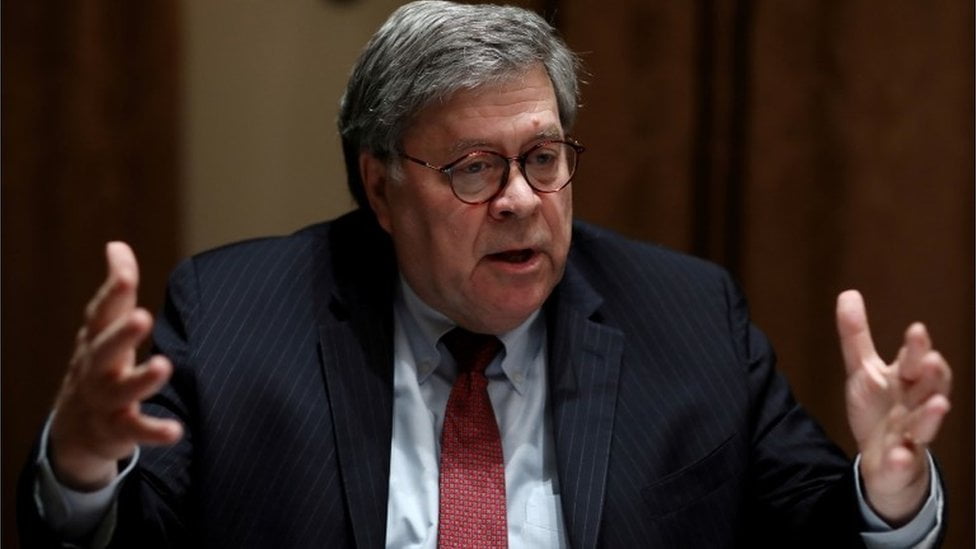 Some have dismissed the public dance between Barr and Trump as Kabuki theater — but the attorney general’s allies insist Barr’s patience is not infinite.

What is William Barr’s red line?

It’s the question flying around the Justice Department and the legal world as the attorney general is locked in a tense standoff with Donald Trump, who is defying Barr’s public plea last week that the president stop his high-profile punditry about pending criminal cases.

Trump has refused to cease his incessant commentary about the ongoing prosecutions of his former aide Michael Flynn and longtime adviser Roger Stone. After discussing both on Tuesday, Trump indulged his hardcore Twitter habit again Wednesday with a series of retweets painting him and his supporters as beleaguered by the so-called deep state. Trump then retweeted video clips directly criticizing Barr for admonishing him to pipe down.

In response, Barr has said … well … nothing — at least in public.

But rumblings of the attorney general’s unease have grown over the past couple of days, with news reports saying Barr has mentioned to associates that he might resign if Trump keeps up the drumbeat of commentary on DOJ business.

Such a threat was implicit in Barr’s televised ABC interview last week in which he said it was “impossible” for him to do his job amid a constant flurry of Trump’s tweets.

“I cannot do my job here at the department with a constant background commentary that undercuts me,” Barr said.

People close to Barr said the attorney general has been frustrated with Trump’s statements for months, telling the president to rein them in and enlisting White House counsel Pat Cipollone and others to reinforce the message. Barr’s patience is not infinite, the attorney’s general’s associates emphasized, without specifying just what he would do in response. Still, they insisted the DOJ chief is not on the verge of quitting — yet.

The only official answer to the reports Barr might resign came from his spokeswoman Kerri Kupec, on Twitter — ironically enough.

“Addressing Beltway rumors: The Attorney General has no plans to resign,” Kupec wrote.

Her terse statement, lodged firmly in the present tense, did not deny that Barr had considered quitting or that he suggested to others he might step down.

Some have dismissed the public dance between Barr and Trump as a sort of Kabuki theater, designed to demonstrate irritation where none really exists.

Trump began attacking federal judges five years ago during the 2016 campaign, when he mounted a racist attack on a Latino federal judge in San Diego handling a fraud lawsuit over Trump University. Last October, Trump decried his GOP critics as “human scum.” Earlier this month at the White House, with Barr in the audience, the president referred to the former leadership of the FBI as “top scum.”

Barr may even have fueled the president’s airing of grievances by declaring publicly at the close of special counsel Robert Mueller’s investigation that Trump had good reason to be angry, given his personal belief that the allegations of collusion with the Russians were bunk.

However, even some Justice Department veterans who are highly critical of Barr said they believe the attorney general’s asserted discomfort is genuine because Trump’s litany of statements and their timing has undermined Barr’s credibility with the career prosecutors and investigators who do the department’s day-to-day law enforcement work.

Department veterans said Barr bought himself some time with his public rebuke of the president. If he hadn’t spoken out, these veterans said, other prosecutors might have shed their ties to politically sensitive cases, following in the footsteps of the four career officials who ditched the Stone case after Barr intervened to overrule their recommended 7- to 9-year prison term for the longtime GOP operative.

Now, Barr faces another credibility challenge, driven by his own public dressing down of Trump and the president’s unsurprising snub of it.

“He’s really getting into boy-who-cried-wolf territory with this round of stories, saying he’s considering resigning, especially because the president is just not going to change his behavior,” said Matt Miller, a former aide to Obama-era Attorney General Eric Holder. “If you don’t resign, you look both feckless and insincere.”

“I think this will blow over,” said Mike Davis, who previously served as the Senate Judiciary Committee’s nominations counsel under Sen. Chuck Grassley (R-Iowa). “It would be a huge loss if Barr left. I think he’s been a fantastic attorney general.”

People close to Barr and Trump said Barr’s concerns were genuine but did not signal an imminent blowup.

“There is some tension. The tension has been public. Bill hasn’t hidden what his concern is,” said one person familiar with their interactions. “They’ve both been public about it. I think they still a have a very good relationship.”

The source also dismissed the notion that the attorney general is on the verge of quitting.

“I can imagine a circumstance where he said, ‘I’m not dealing with this. I may resign.’ That may be a general conversation that was misinterpreted,” said the Barr ally. “Barr is not hiding the fact it’s difficult for him. But it doesn’t mean he’s leaving.”

One former senior administration official said the media reports about Barr’s resignation threat looks more like it was done “to try to create a rift” between his attorney general and the president.

“I just can’t think a guy in my mind as savvy as Barr, that he’d actually tell people that,” said the former official. “I have a hard time believing that’s what happening. That’s tempting fate. Now you’re going to get the president pissed off and he’s going to say, ‘You know what? Fire him.’”

The statement came as a petition by former Justice Department officials calling on Barr to resign surpassed 2,000 signatures.

At Barr’s only public event Wednesday, he got a vote of confidence from FBI Director Christopher Wray, even through the two men offered notably different takes on the recent inspector general report on surveillance abuses — with Barr striking a more Trump-friendly stance.

“He is no stranger to tackling challenges,” Wray said of Barr, calling him “my friend” and noting his long history at DOJ, including his prior stint as attorney general three decades ago. “We need that type of strong leadership.”

Barr continued to build common cause with the U.S. national security establishment by joining in an op-ed released Wednesday warning about the threat of foreign interference in the 2020 election. The topic is known to be one whose mere mention irritates the president, but the piece soft-pedaled the part most galling to Trump, making just one passing reference to Russia.

For now, the guessing game inside and outside the Justice Department is just how much interference and commentary from the president Barr will stomach before moving on.

Barr has built up a thick skin during his two stints as attorney, so no one expects him to resign because Trump tweeted some unkind videos from Fox Business News. But worrisome for Barr is that one of Trump’s retweets Wednesday highlighted past presidents’ efforts to influence Justice Department investigations.

Barr’s effectiveness is now directly tied to the intensity of Trump’s focus on his DOJ-related grievances. If there are many days when the president obsesses about them publicly, the attorney general’s tenure may be limited.

On the other hand, Trump is eminently distractable and sometimes seems more interested in whacking the Democratic presidential candidates than going after the deep state.

As Trump’s political schedule ramps up in the coming months, the chief risk for Barr may be that the president decides to make railing against prosecutors, judges and even jurors a staple of his campaign stump speech, delving into the topic again and again.

But to really put the attorney general in an excruciating fix, those attacks would have to coincide with Barr’s efforts to exert control over the department — a perfect storm that occurred last week, but that might not be whipped up to the same degree again before the election.

“People at the Justice Department will tolerate the attorney general getting involved in their cases for legitimate reasons,” said Miller, the former Holder aide. “The AG has the right to do that. They’ll even tolerate it if there’s some deniability of a political motive, but when the president removes any plausible deniability, there’s nothing for the career employees to do but revolt to keep their own integrity intact.”