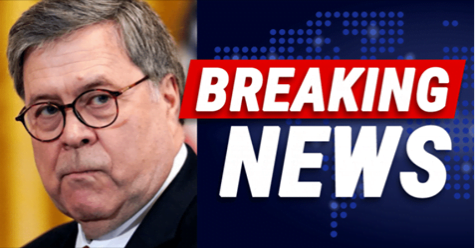 It’s been a week since the election and Trump is fighting to make sure it was free and fair before a winner is officially announced.

Plenty of people have worried about problems that have come to light in several states. In fact, some Trump supporters have rallied outside counting houses and legislative buildings to demand a fair election.

It looked like the attorney general was on the fence over the situation, hesitant to get involved. Well, not anymore:

Attorney General William Barr has authorized federal prosecutors across the U.S. to pursue “substantial allegations” of voting irregularities, if they exist, before the 2020 presidential election is certified, despite no evidence of widespread fraud.

AG Barr is directing federal prosecutors to investigate any claims into voting irregularities, such as have emerged in various states since Election Day.

That means prosecutors across the country can step up and look into the many reports have that been ignored by the MSM.

And just after Barr sends out this directive, the top guy for election crimes up and quits:

Odd how the guy who was charged with investigating voter fraud quits—after Barr directs agents to look into voter fraud.

Here’s the series of events that lead to this event:

Maybe the GOP decided to fight.

You and I both know there is more than enough smoke to justify at least an investigation by the DOJ.

If we’re wrong and there were “irregularities” that affected the election, then great. We can all move on.

But the fact that the media and Democrats are so determined to intimidate Trump supporters and scream there was no problem with the election should get our attention.

Funny how every last MSM has to add “there is no evidence” to every article—as if they bothered to investigate any of this themselves?

Many people are worried about what happened in Michigan, Wisconsin, Georgia, Arizona, Nevada, and Pennsylvania. Some are concerned that ballots were added at the last minute to sway the results.

If that’s the case, shouldn’t there be some kind of scrutiny? Don’t Democrats care about our elections as much as the rest of us?

Do you think Barr should investigate these swing state results?