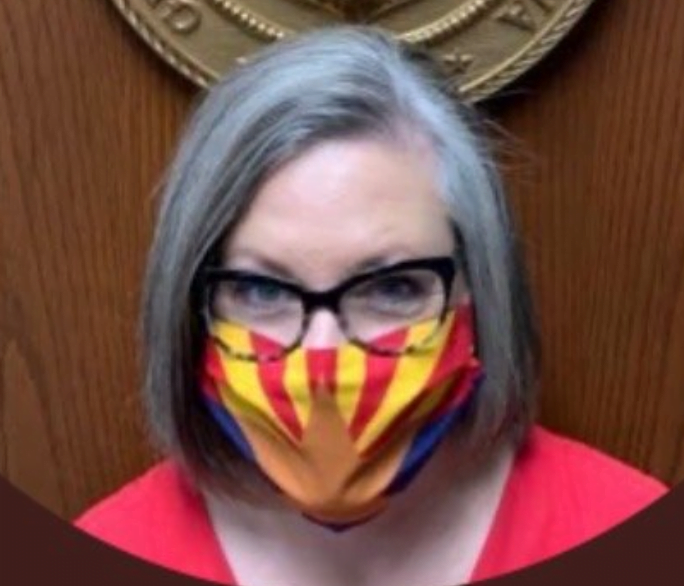 Hobbs, who was installed in 2018 at a choke-point in Arizona government, is that quiet Manchurian candidate, activated when the stakes are critical, in this case as the state’s Senate gets ready for its three-week-long forensic audit of the Maricopa County 2020 elections beginning on Thursday.

America’s fourth-largest county, Maricopa is about to go through a forensic audit of its 2.1 million ballots led by four audit teams selected by the AZ Senate. Senate President Karen Fann described the audit’s scope in a March 18 press release as being “broad and detailed: the team will include, but is not limited to, testing the machines, scanning the ballots, performing a full hand count and checking for any IT breaches.”

FOR IMMEDIATE RELEASE: Update on the full, detailed audit of the 2020 election in Maricopa County#AZSenate #Audit pic.twitter.com/0HHfPuGKex

The national Democratic machine will do anything to stop this audit. Their desperation is now out in the open and they are losing their minds.

They sent a very threatening e-demand letter on April 6 to the four audit teams via Hillary consigliere Marc Elias’s firm, Perkins Coie. The letter was sent by a hit squad led by an activist, progressive nonprofit – Elias’s favorite hammer – the Protect Democracy Project, and backed by two additional law firms, Coppersmith Brockelman in Phoenix and Barton Mendez Soto in Tempe.

When this letter wasn’t enough, Marc Elias entered the picture. He alerted his gigantic national activist network of 400+ radical, Democrat-controlled nonprofits and 40,000+ eager progressive lawyers that there was action in Maricopa that needed watching. He also connected these SJWs up to the powerful progressive media network in Arizona, reporter Howard Fischer’s Capitol Media Services network.

Perkins Coie and Elias were responsible for the discredited and failed Fusion GPS/Steele Dossier hit upon candidate Donald Trump back in 2016 on behalf of the DNC and Hillary Clinton’s campaign.

Still not enough of a threat, the Democrats must be working behind the scenes with their ANTIFA/BLM mob network in Seattle and Portland and alerted them to be ready to hightail it to Arizona.  General Flynn warned of this last week:

George Soros dollars follow Marc Elias. In 2016, Soros, according to Influence Watch, “gave at least $5 million to Elias and his firm to challenge what left-wing activists allege to be restrictions that deter Democrats and left-wing constituencies from voting.” In 2017, Soros gifted $5 million to the Priorities USA super PAC, after Elias had joined that board.

With the Democrats’ backs to the wall, they finally deployed their ace in the hole, a high-ranking Democratic public official with the legal elections’ muscle to throw a monkey-wrench into this audit and derail it. That person, that Manchurian candidate, is none other than Arizona’s Chief Election Official, Secretary of State, Katie Hobbs.

At this critical moment in Arizona and United States’ history, a Soros/Clinton puppet who was supported in her Arizona Secretary of State (SoS) election back in 2018 by both Soros’s secretive, progressive billionaires’ club, the Democracy Alliance, and the massive Clinton nonprofit empire, Onward Together, can hold Maricopa County, the AZ Senate and the country hostage.

Katie Hobbs ran for Arizona SoS in 2018, her first run, and won. She was explicitly promoted by iVOTE, yet another Soros-founded nonprofit conglomerate that was specifically set up to endorse and elect progressive, Democrat Secretaries of State.

George Soros, who has meticulously planned over decades how he will secretly dismantle our capitalist society, build a massive progressive infra-structure, in order to quietly dismantle our Constitutional Republic and replace it with a socialist nightmare, has targeted elected offices that have a strategic, choke-hold position in our American communities. County DAs control indictments and prosecutions; Attorney Generals are states’ chief law enforcement officers and SoS’s control the entire election system in a state! All of these elected officials can ensure the implementation of socialist laws and regulations.

Matthew Vadum, now an Epoch Times columnist who for decades has covered crooked and corrupt U.S. nonprofits and foundations, informed the public in 2009 about Soros’ newest plans to sabotage America:

A group backed by Soros is gearing up to steal the 2012 election for President Obama and congressional Democrats by installing left-wing Democrats as secretaries of state across the nation. From such posts, secretaries of state can help tilt the electoral playing field … The vehicle for this planned hijacking of democracy is a below-the-radar non-federal “527” group called the Secretary of State Project [SoSP].

George Soros’s election-rigging project is back from the dead. The Secretary of State Project (SoSP) … that went dormant two years ago, has been reincarnated as iVote…
… iVote is a “PAC of grassroots activists and veterans of the campaigns of last three Democratic nominees … Like SoSP, iVote is trying to help left-wing candidates, who think voter fraud is a figment of your imagination, become elected as secretaries of state in states across the country, where they can then change election rules to discriminate against Republicans.

[We’ve already written about Michigan SoS Jocelyn Benson (D), who was backed by the Soros SoSP. Look at the mayhem she has caused during and after that swing state’s 2020 election.]

Secretaries of State: If we want the Resistance to succeed we have to elect Democratic voting rights champions in to this critical office.

Here is Hobbs’ featured on her 2018 iVOTE webpage:

Now more than ever we need to elect Democratic Secretaries of State in order to secure voting rights for all citizens. In 2018, iVote is zeroing in on this key office in swing states and across the nation. Electing those who will fight to ensure Republicans can no longer bar certain people from the ballots is crucial to our democracy.

The iVOTE Fund was specifically endorsed and financially supported by Hillary Clinton’s massive nonprofit cabal, Onward Together, starting in late 2017. Because OT and iVOTE donations are funneled through the Democrat’s ActBlue platform, it is impossible to figure out how much in donations Hobbs may have received from OT and from iVOTE for her 2018 campaign. Featured on Clinton’s OT webpage, Hobb’s likely got a lot of money though iVOTE.

We know from Hobbs’ AZ State Financial Disclosure Form that she accepted an unknown amount in gifts from the ‘State Innovation Exchange’ which “receives funding from the Democracy Alliance, which bundles large contributions from wealthy donors including George Soros and Tom Steyer.”

Alarmingly, Hobbs has also accepted money from foreign governments, which needs to be investigated, given that there may well prove to have been foreign influence in our 2020 election!

This progressive AZ SoS was hand-picked and blessed by the national Democratic machine and its vast nonprofit money laundering operation. Of course, she won her election in 2018.

How much in-campaign contributions did Hobbs end up getting from the Clinton/Soros empires? Who knows! Nonprofit corporate mechanisms are the perfect money-laundering machines and the Dems have perfected the art of the steal.

So, Hobbs is AZ SoS and here we are at a chokehold moment 2 ½ years later, and this Clinton/Soros Manchurian Candidate is about to unleash something which could stop the AZ Senate’s forensic audit dead in its tracks.

What has Hobbs, this wolf in sheep’s clothing, been up to?

On April 1, Hobbs sent a letter to the Maricopa County Board of Supervisors (MCBOS) just before these five Supervisors had scheduled a 10:00 AM, secret, closed-door, emergency meeting, which is absolutely in violation of open meetings’ laws. In her letter, she twisted the intent of the Senate, which is to remain hands-off during the audit, as “abdicating any responsibility or engagement in the audit process,” and “dangerous and irresponsible.” She utterly trashed the Senate’s lead firm, Cyber Ninjas as well as Jovan Hutton Pulitzer, and made this pronouncement, “Even if some previously harbored hope that this audit would build voter confidence, it should be clear now that the Senate has chosen another path. They’ve prioritized conspiracy overconfidence.”

Hobbs ended by giving the MCBOS unmistakable marching orders for their secret meeting:
“…this morning, I asked Attorney General Brnovich’s Office to advise me of any legal options the Secretary of State may have to protect the integrity of our system and out voters’ confidence in it. But the County’s options in this regard are undoubtedly clearer than my Office’s. As you meet today, I ask that you carefully consider every option, and do what is necessary to protect our voters and our democracy.”

Did Hobbs, as the state’s allegedly nonpartisan Chief Elections Officer in charge of championing, preserving, protecting and defending election integrity for all the people, contact this Board to sanction them for their repeated, egregious violations of the chain of custody of the 2.1 million ballots in their safekeeping?  Nope, Hobbs was silent!

It remains to be seen what the MCBOS decided in their secret meeting which certainly the SoS was privy to. We know their agenda, which was posted less than a day before the meeting: the Board “may consider: Legal advice regarding Board responsibilities and authority re: Elections, election equipment, audits, Senate subpoenas, and litigation.“

Clearly, this Soros-backed SoS views the Arizona Senate – and the Maricopa and Arizona citizens demanding this audit – as her adversaries and this corrupt MCBOS as her ally, for why else would she signal to that Board – which, by the way, is facing recall by angry Maricopa citizens – to “do what is necessary”?!

Seven days ago, the Arizona Daily Independent reported that SoS Hobbs actually got approval from the Arizona AG, to “retain private legal services.”  The Independent stated:

Another wild card in the audit process is Arizona Secretary of State Katie Hobbs, who was recently given a green light by Arizona Attorney General Mark Brnovich to retain private legal services to see how her office might challenge the Senate’s plans.
Hobbs is considered the state’s chief elections officer. She wrote to the Maricopa County supervisors earlier this month of her concern with Fann’s selection of Cyber Ninjas. The choice, wrote Hobbs, “made it clear that the Senate has no intention of conducting an independent audit or ensuring the ongoing security and confidentiality of Maricopa County’s ballots and voting equipment.”

This Clinton/Soros puppet SoS is readying the state of Arizona for a legal fight between her office and the Arizona Senate using taxpayer dollars!

You would think that a Chief Election Official would welcome a comprehensive forensic audit, one that would either validate the integrity of the election processes in Maricopa or would reveal the weaknesses and problems, which her office could then help repair.

What are SoS Hobbs’ reasons for this potential lawsuit? Are her actions supported by Arizona Republican Governor Ducey?

This Secretary of State’s actions are very concerning and simply mind-blowing!