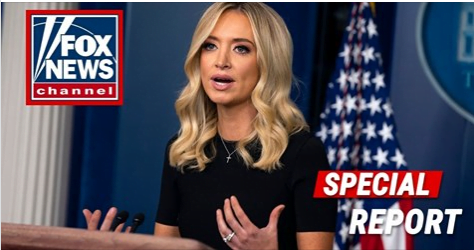 What’s happening to Fox News? It seems like Trump’s long-time criticism is proving right, after all.

They called Arizona for Joe Biden early on election night. That seemed to send confusion among many at home trying to understand what was going on.

Then, they followed left-leaning outlets to call the election for Biden, despite the fact it hasn’t been officially determined yet.

And now, they appear to be actively showing aggression to Trump’s own press secretary. Here was the stunning tweet:

Fox News cuts away from the Trump campaign press conference with Neil Cavuto saying that they "can't in good countenance continue showing this" when @PressSec says that Democrats are "welcoming fraud and welcoming illegal voting" in the election pic.twitter.com/0d5B5cJ0D8

Fox News cuts away from the Trump campaign press conference with Neil Cavuto saying that they “can’t in good countenance continue showing this” when @PressSec says that Democrats are “welcoming fraud and welcoming illegal voting” in the election.

It appears that Fox News, along with other MSM outlets refuse to acknowledge the growing concerns over the election results.

They even cut from the press secretary’s comments, just to prevent viewers from hearing about it. Strange, for a network devoted to being “fair and balanced.

Now it seems like their core audience is making them feel the pain:

Last Friday’s ratings for the supposedly “conservative” outlet were less than both CNN and MSNBC for the first time in years, according to an internal Fox document containing viewership analytics.

Fox News used to dominate in the ratings. In fact, as many other news outlets saw a decrease in viewership in recent years, Fox only soared. Until, that is, this last week.

The “conservative” network stunned millions of Americans by throwing their weight behind Joe Biden. They also appear to be following the liberal-leaning outlets by refusing to acknowledge possible fraud and other election irregularities.

The result? Their ratings fell below both CNN and MSNBC, something that hasn’t happened in a long time.

Hmm… could it be that many conservatives are realizing that Fox News might not be as “conservative” as they thought it was?

Keep in mind, it’s liberals who frequently accuse Fox of being conservative because they had a few right-leaning hosts on.

Fox itself has always featured liberal pundits, like former DNC head Donna Brazile or Juan Williams. Not to mention Neil Cavuto himself, who has long been an anti-Trumper.

And let’s not forget Fox News is home to Chris Wallace, a Democrat who has long opposed Donald Trump.

Perhaps this all has something to do with their crash in ratings?