WATCH: Stefanik rips Pelosi for Dems losing House races “She is losing her leverage by the day” 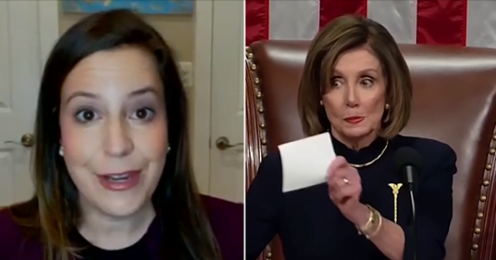 “There are a number of provisions that we agree on,” she continued “For example, additional aid to small businesses who are continuing to suffer, particularly as we head into this holiday and retail season. Direct support for K-12 schools. That legislation would be signed into law today or yesterday if Speaker Pelosi would negotiate in good faith. Instead, she played politics leading up to the election, and she lost.”

Stefanik added “She lost every single toss-up seat in the country. Republicans have picked up numerous seats, and we’re continuing to pick them with an Iowa House seat and a California House seat. She is losing her leverage by the day. And I think the reality is if she can get her votes for speaker, which is still an open question, she is controlled by the far-left in AOC. So she’s going to have to go to them to get their approval.”