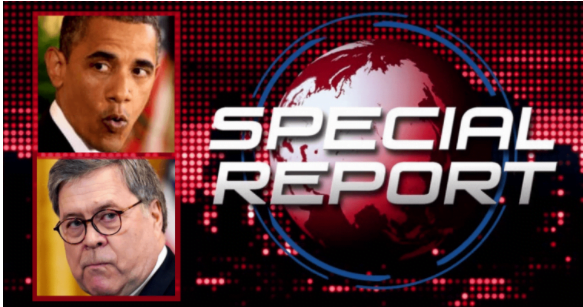 Obama thought he was safe – here comes Barr and Durham!

Many Americans are fed up with what happened during 2016. They even said nothing would be done about how Democrats tried to wrongly stop Trump from winning.

They used a whipped-up dossier to acquire a warrant to spy on his campaign. The deep state tried to find dirt on him and his people. All to prevent people from voting for him.

Yet he still won.

Even today, as the president tried to move on, the left is still trying to undo the 2016 Election. All their impeachment pushes is simply over the fact they can’t accept Trump is president.

But, never fear patriots. Because AG Barr’s bulldog has been going after Obama’s team all along, and he’s going even deeper than we thought!

John Durham, the U.S. attorney reviewing the origins of the 2016 counterintelligence investigation into Russia and the Trump campaign, is probing a wider timeline than previously known, according to multiple senior administration officials…

The timeline has grown from the beginning of the probe through the election and now has included a post-election timeline through the spring of 2017, up to when Robert Mueller was named special counsel.

This should put a damper on the left’s victory laps. Because John Durham, the bulldog, has expanded his probe into what Obama’s team was doing during the election.

Durham is looking at how Obama’s FBI conducted their “probe” into Trump’s team. We know they used a fake dossier to get a warrant. They violated Trump’s Fourth Amendment rights in order to stop him from winning.

More than that, Durham is looking into just what went on after the election—through the transition period.

We know that Democrats were scheming even then. FBI Director James Comey used the same phony dossier to conduct an investigation.

That investigation was supposed to be used by the left to either block Trump’s inauguration or quickly remove him from office.

Even after Comey was removed, they pinned all their hopes on Mueller. Who, as you know, begrudgingly cleared Trump’s name.

All of this was extremely fishy. We know the left can’t accept Trump’s 2016 victory. And they’re doing everything they can to stop him from winning in 2020.

Did they break the law to stop him? We might think so—but we need real evidence to close the book on this.

Durham is looking into every possible decision that wasn’t above board. AG Barr already said how Obama conducted the probe was questionable.

Now, Durham is shaking every tree. We might see some real revelations coming out soon.

SHARE if you want Obama and his team prosecuted for spying on Trump!