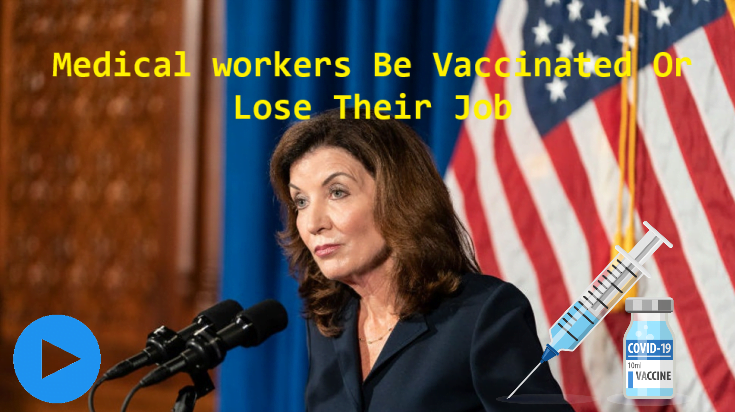 A federal judge on Tuesday extended a ban on Democratic New York Governor Kathy Hochul’s order mandating all health care workers in the state of New York to be vaccinated against COVID-19, without any exceptions, lest they be fired.

The restraining order was pushed back another two weeks; now health care and longterm care employees in the state seeking a religious exemption can remain unvaccinated until at least October 12, and keep their jobs.

In an accompanying video, Brean explained that if the order turns into a preliminary injunction, those seeking a religious exemption to the vaccine in NY will be allowed the exemption for as long as the case pends.

Breaking: federal judge extends the temporary ban on the NYS vaccine mandate for health care industry workers claiming a religious exemption until October 12th. Then the order could turn into a preliminary injunction. @news10nbc pic.twitter.com/6XmDrymi5z

Judge David Hurd last Tuesday issued the order giving the Hochul administration “until Sept. 22 to respond to the lawsuit in federal court in Utica,” ABC News reported. “If the state opposes the plaintiffs’ request for a preliminary court order blocking the vaccine mandate, a Sept. 28 oral hearing will occur.”

Now-resigned Governor Andrew Cuomo (D-NY) on August 16 announced that all healthcare workers in the state of New York, including staff at hospitals and long-term care facilities such as nursing homes, adult care facilities, and other congregate care settings, are required to be vaccinated against Covid-19.

The Thomas More Society argued that the mandate “attempts to nullify protections for sincere religious beliefs granted under Title VII of the Civil Rights Act of 1964, even though days earlier the state of New York had afforded protection for religious beliefs in its prior health order.”

Attorney Christopher Ferrara, Thomas More Society Special Counsel, called the move “a brazen power grab by people who think they can get away with anything.”

“What New York is attempting to do is slam shut an escape hatch from an unconstitutional vaccine mandate,” Ferrara argued. “And they are doing this while, knowing that many people have sincere religious objections to vaccines that were tested, developed, or produced with cell lines derived from aborted children.”

“These plaintiffs are not – I repeat – not anti-vaxxers, as the fake news media calls them,” stressed Ferrara. “They are in fact in favor of voluntary vaccination with informed consent, but they oppose jack-booted coercion by the state to take a vaccine their religion forbids them to take. This is America, not Red China.”

“Without court intervention,” Ferrara warned before Judge Hurd’s order, “these health professionals face loss of occupation, professional status, and employability anywhere in the state of New York. All because of an abortion-connected vaccine, one that they cannot take in good conscience.”