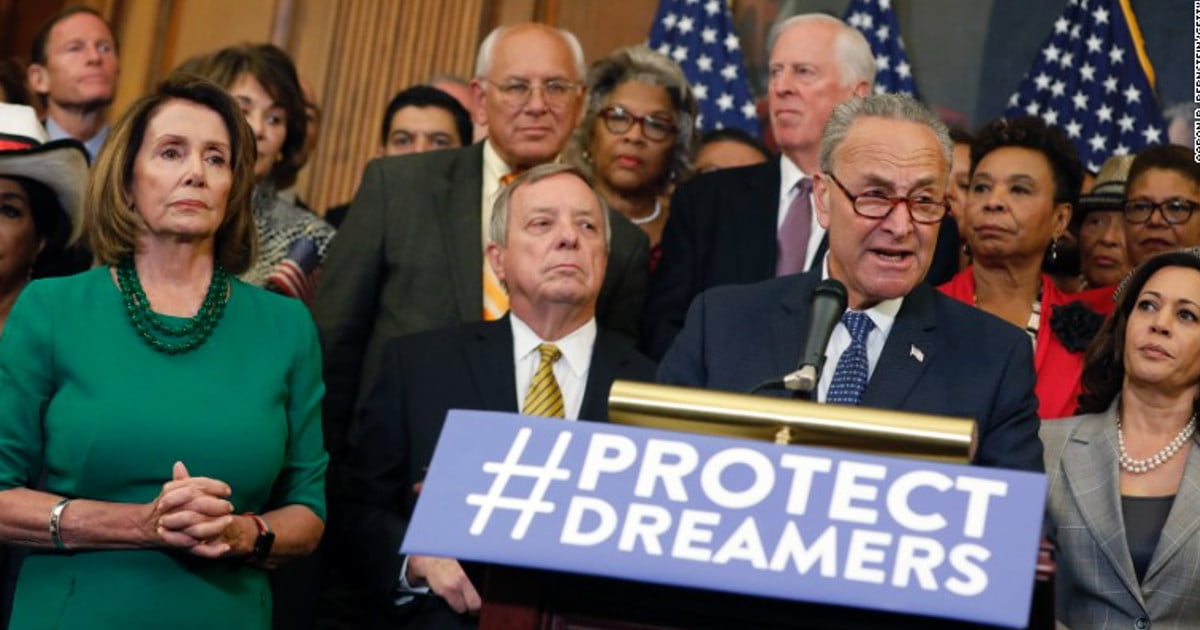 President Trump on Sunday argued again that Democrats and their demands — not him or fellow Republicans in Congress — have throttled negotiations to provide permanent legal protection for young illegal immigrants and made clear that any such deal also must end the United States’ lottery-immigration program.

“DACA is probably dead because the Democrats don’t really want it, they just want to talk and take desperately needed money away from our Military,” said Trump, in one of several tweets on the issue of immigration reform and on the related Deferred Action for Childhood Arrivals, or DACA, program.

The president and Congress are attempting to reach a deal on comprehensive immigration reform as part of a federal spending bill that Congress must pass by Friday to avoid a government shutdown.

DACA is probably dead because the Democrats don’t really want it, they just want to talk and take desperately needed money away from our Military.

Trump’s tweets Sunday follow an intense week of negotiation on the issue, including a 55-minute, televised White House meeting with him and Democratic and Republican congressional leaders.

Among the issues are Trump’s desire for any such deal to include money for a U.S.-Mexico wall for border security and changes to the lottery and so-called “chain migration” immigration programs.

Democrats want the deal to include the permanent protections for young illegal immigrants, now that Trump is ending such safeguards under DACA, the executive order by former President Barack Obama.

Trump announced the change last year and said the program would end in March 2018. But Democrats and others had hoped to reach a deal on DACA under the upcoming spending bill.

I, as President, want people coming into our Country who are going to help us become strong and great again, people coming in through a system based on MERIT. No more Lotteries! #AMERICA FIRST

After last week’s White House meeting, a bipartisan group of senators submitted a plan to the White House that seemed agreeable to Trump — considering it reportedly included $1.6 billion for his border wall.

However, the White House by Thursday had essentially rejected the deal, arguing it didn’t go far enough to curtail the chain migration, which allows green card holders and U.S. citizens to petition to bring family members into the United  States.

Trump also sparked a firestorm over his reported comments at the White House meeting related to the immigration-lottery programs, which allows people into the U.S. from countries that don’t have a lot of immigrants in the United States.

Critics have since characterized his remarks as racist.

Department of Homeland Security Secretary Kirstjen Nielsen was at the meeting with Trump and others. She told “Fox News Sunday” that she didn’t “recall him using that exact phrase” about people coming from Haiti and some African nations, but that he did use “strong language” on the lottery issue.

Trump also tweeted Sunday: “I, as President, want people coming into our Country who are going to help us become strong and great again, people coming in through a system based on MERIT. No more Lotteries! #AMERICA FIRST.”

“Democrats seem to be moving the goal post,” he said on Fox News’ “Fox & Friends.” “You don’t have a meeting in the Oval Office, then leak contents if you’re serious about cutting a deal.”

Shah pointed out that Washington lawmakers have a month and a half until DACA begins to wind down and find a permanent solution. And he expressed concern about shuttering the government this week over the issue.

“That would be very unfortunate,” he said.

Trump tweeted Saturday: “The Democrats are all talk and no action. They are doing nothing to fix DACA. Great opportunity missed. Too bad!”