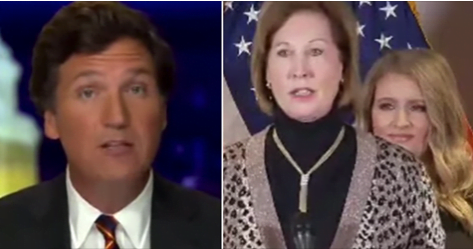 After being criticized by Tucker Carlson, Trump lawyer Sidney Powell has fired back.

Powell told Anthony Leonardi of the DC examiner “Apparently Mr. Carlson missed the news conference today. I would continue to encourage him and all journalists to review all the materials we have provided so far…. and conduct their own investigations. Evidence continues to pour in, but a 5 minute television hit is not my focus now.  Collecting evidence and preparing the case are my top priorities.”

… and conduct their own investigations. Evidence continues to pour in, but a 5 minute television hit is not my focus now.  Collecting evidence and preparing the case are my top priorities.”

Friday, Fox News host Tucker Carlson questioned Trump lawyer Sidney Powell’s provocative claims, saying she declined his invite to appear on his show and also refused to send any evidence to him.

Tucker said “on Sunday night, we texted her after watching one of her segments. What Powell was describing would amount to the single greatest crime in American history, millions of votes stolen in a day. Democracy destroyed. The end of our centuries-old system of self-government — not a small thing,”

He added “we took Sidney Powell seriously. We had no intention of fighting with her. We’ve always respected her work. We simply wanted to see the details. How could you not want to see them? So, we invited Sidney Powell on the show. We would’ve given her the whole hour. We would’ve given her the entire week, actually, and listened quietly the whole time at rapt attention. That’s a big story. But she never sent us any evidence, despite a lot of requests — polite requests. Not a page.”

“When we kept pressing, she got angry and told us to stop contacting her,” Tucker added “When we checked with others around the Trump campaign, people in positions of authority, they told us Powell has never given them any evidence either. Nor did she provide any today at the press conference. But she never demonstrated that a single actual vote was moved illegitimately by software from one candidate to another. Not one.”

Powell appearing with Lou Dobbs earlier in the week: