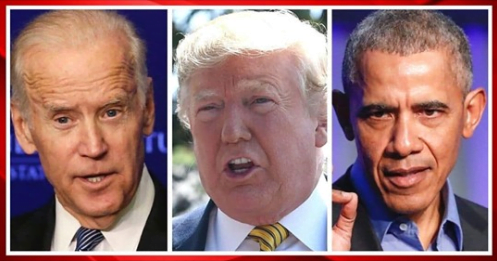 The DNI has released a mountain of documents on actions taken against Trump during the 2016 Election.

We are learning just how far the left went to try to undermine our democracy.

And after that, how they sought to disrupt the peaceful transfer of power.

He wants action to be taken which should have a huge impact on the election.

And he’s calling on AG Barr to move immediately:

President Donald Trump is calling for former President Barack Obama, former Vice President Joe Biden, and former Secretary of State Hillary Clinton to be charged with crimes — and said his Attorney General, Bill Barr, will go down in history as “sad” if he fails to bring charges…

“Unless Bill Barr indicts these people for crimes — the greatest political crime in history of our country — then we’re going to get little satisfaction,” Trump said. He added, “And that includes Obama, and that includes Biden.”

President Trump is dropping a hammer on Obama, Hillary Clinton, and even Joe Biden. He wants the attorney general to indict these Democrats for what he calls crimes during the 2016 Election.

Trump was commenting on the documents released by DNI Ratcliffe. These documents revealed the origins of the left’s Russian investigation.

Among the revelations made, we learned that John Brennan briefed Obama personally about what Hillary Clinton was trying to do.

His own memos reveal Clinton created the

Russian collusion story to distract from her email investigation.

That shows Obama knew the Russian story to be an invention of Clinton. But not only did he and Biden do nothing to stop her, but they used that same story to launch an investigation themselves.

The FBI tried to pin this story on Trump’s campaign—in an apparent attempt to undermine the election.

Even after Trump won, the left used this bogus story to delegitimize his election, something they continue to do to this day.

These are bombshell revelations, but you won’t hear about them from the MSM. This utterly tarnishes Joe Biden’s reputation. So, the left-wing media won’t report on it.

President Trump is calling on his AG to prosecute these people. But will he?

Trump has some harsh words for Barr—but the attorney general might not act.

The only tangible way, it seems, for these people to be held accountable in on November 3.