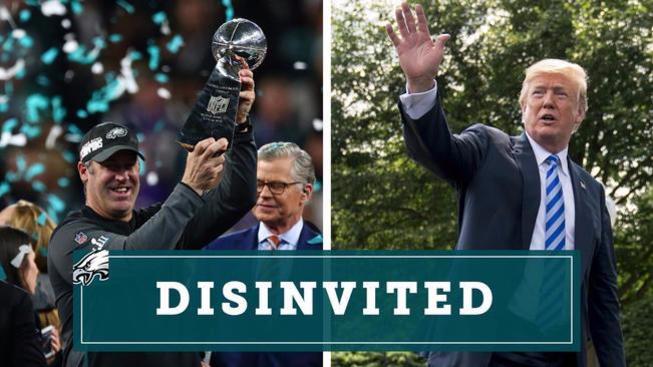 President Trump on Monday abruptly announced that Super Bowl champions the Philadelphia Eagles would not visit the White House on Tuesday, citing the team’s participation in national anthem protests.

“The Philadelphia Eagles are unable to come to the White House with their full team to be celebrated tomorrow. They disagree with their President because he insists that they proudly stand for the National Anthem, hand on heart, in honor of the great men and women of our military and the people of our country,” Trump said in a statement.

“The Eagles wanted to send a smaller delegation, but the 1,000 fans planning to attend the event deserve better,” he added.

Trump said Eagles fans are still invited to the White House “to be part of a different type of ceremony — one that will honor our great country, pay tribute to the heroes who fight to protect it, and loudly and proudly play the National Anthem.”

A copy of Trump’s schedule released by the White House just after 10 p.m. Monday said that at that time on Tuesday he would be participating “in the Celebration of America.”

Trump has frequently criticized NFL players who protested during “The Star-Spangled Banner” before games last season, calling for them to be punished or fired.

Multiple Philadelphia players were among those who protested during the national anthem last season to raise awareness of social justice issues. Eagles owner Jeffrey Lurie has reportedly criticized Trump’s views on the protests, as well as his “disastrous presidency,” in private.

“Another fact I want to throw out there: Many of us have no interest in supporting President Trump,” Lurie said during an October meeting with owners, players and league executives, according to The New York Times.

Some of the Eagles said following the team’s Super Bowl victory that they would not visit the White House if invited.

ESPN’s Adam Schefter reported Monday night that most or all of the black players on the team had planned to skip the White House visit.

NFL Network reporter Mike Garafolo said Monday night that the team had discussed traveling to Washington, D.C., together, and then sending a smaller group to the White House while others met with lawmakers or visited tourist attractions.

Garafolo said he did not learn the exact number of players who would visit the White House, but heard that it was going to be less than 10.

After Trump’s announcement, two Democratic Pennsylvania lawmakers — Sen. Bob Casey and Rep. Brendan Boyle — took to Twitter to invite the team to visit the Capitol instead.

“Disinviting them from the White House only proves that our President is not a true patriot, but a fragile egomaniac obsessed with crowd size and afraid of the embarrassment of throwing a party to which no one wants to attend,” Kenney said in a statement.

The Eagles issued a brief statement late Monday that did not acknowledge the president’s decision to rescind the invitation.

“It has been incredibly thrilling to celebrate our first Super Bowl Championship,” the team said. “Watching the entire Eagles community come together has been an inspiration. We are truly grateful for all of the support we have received and we are looking forward to continuing our preparations for the 2018 season.”

League owners voted last month to implement a new policy that requires players to stand during the anthem next season, or face a fine. Players also have the option to remain in the locker room.

Even with the new policy, Trump continued to attack those who don’t stand for the anthem, suggesting they don’t belong in the country.

In a tweet late Monday night, Trump said staying in the locker room “is as disrespectful” as kneeling.

The Philadelphia Eagles Football Team was invited to the White House. Unfortunately, only a small number of players decided to come, and we canceled the event. Staying in the Locker Room for the playing of our National Anthem is as disrespectful to our country as kneeling. Sorry!

This marks the second time the president has disinvited a championship team from the White House over political differences.

Trump rescinded an invitation to the Golden State Warriors last year after star player Stephen Curry said he probably would not attend.

“Going to the White House is considered a great honor for a championship team,” Trump tweeted. “Stephen Curry is hesitating, therefore invitation is withdrawn!”