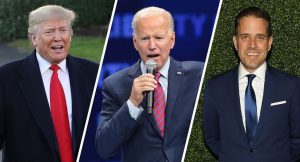 Despite his administration is soon to end, President Trump continues his work. And that includes actions to confront our bigger problems overseas.

It doesn’t seem like Trump believes Biden will be especially tough on China. And, along with many Americans, he worries about Hunter Biden’s ties to the communist nation.

Joe Biden just might roll over for China, letting the foreign power walk all over the United States.

So, Trump signed an executive order to make sure China pays.

Under the amended directive, by Nov. 11, 2021, U.S. investors will be required to have completely divested their holdings of securities of companies designated by the Defense Department as owned or controlled by the Chinese military.

This move might hit Hunter right in the wallet.

A newly-formed LLC, Rosemont Seneca Thornton, owned by Hunter, Chris Heinz, James Bulger, Devon Archer, and Michael Lin, would own 30 percent of the Chinese-based company. The partnership agreement was signed in June, 2013, but the company was not yet registered with the Chinese government – until about a week after Hunter met with Li during that December trip.

This comes over concerns that these companies are actually linked to the Chinese military.

That could hit Hunter Biden hard, as his firm, Rosemont Seneca Thornton, owns 30 percent of a Chinese-based company.

Since November, American companies have been forced to pull out of investments and agreements with Chinese companies. It’s actually shocking to see how much money was being poured into companies possibly owned by the communist government’s military.

Will this affect Hunter? Evidence suggests that the Chinese government and military have their fingers in far more businesses than we suspect.

This move by Trump might be the last attempt by an American leader to hold China accountable, at least for a long while.