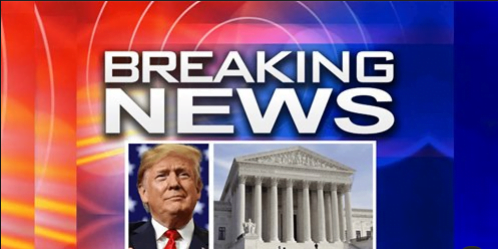 Most of America stayed up late Tuesday night to see if Trump could pull off another victory.

For a while, Trump seemed to be going strong, picking up Florida and Texas, but then things got too close to call and Trump even saw the vote count stopped early in the morning.

Sound fishy? It does to Trump. And he’s refusing to let anything tamper with this election:

“So we will be going to the U.S. Supreme Court. We want all voting to stop. We don’t want them to find any ballots at 4 o’clock in the morning and add them to the list. OK? It’s a very sad, it’s a very sad moment.”

Believing some possible problems were in the works, Trump said he would take this election all the way to the Supreme Court.

Trump defied the polls, once again, by picking up important states like Florida and Texas (winning FL by a wide margin).

But now the election is starting to look like 2000, when the results were delayed by confusion and recounts. The Supreme Court had to get involved back then.

It’s unlikely Joe Biden will back down (or at least, his handlers won’t let him). So, it might come down to a legal battle.

Trump has long warned about questionable mail-in ballots. Several states pushed back their deadlines, so ballots received after Election Day could be counted.

This could be a gateway to some concerning results. The only clear way to prevent this is to ask the Supreme Court to to make sure the rules are fair.

We need clear rules for every state that is delaying their results or trying to count ballots without evidence it was sent in time.

It’s not just this election on the line.

The integrity of our democracy is at stake. Why should anyone vote in the future, if they thought their votes didn’t matter?

Regardless of this outcome, the process by which states count votes has to improve. And it only seems that will happen with a SCOTUS intervention.

Do you want Trump to take this to the Supreme Court?