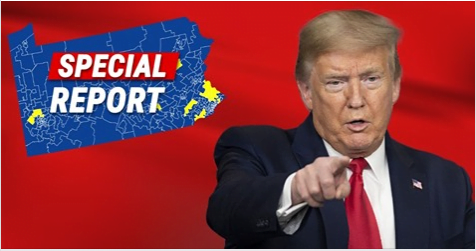 Joe Biden keeps urging Donald Trump to concede the 2020 election, but the President clearly has no plans to quit. His campaign’s lawsuits remain in full effect in multiple states.

And one of the most important battleground states is Pennsylvania, where Trump held a sizable lead – reportedly as high as 800,000 votes – before many mail-in votes were counted.

Ever since Biden came back and won the state, Trump’s team has come down hard on PA.

Well, the President’s campaign has finally earned a victory on one of those points: the undated ballots from absentee voters.

A judge just handed Trump a much-needed win and though it won’t change the state’s results, Donald’s team undoubtedly considers it a step in the right direction.

A Pennsylvania judge sided with the Trump campaign on Thursday, reversing a lower court decision by ruling to toss thousands of ballots without dates.

According to Buzzfeed’s Zoe Tillman, a Commonwealth Court judge ruled that 2,349 absentee ballots in Allegheny County that didn’t hold a valid date can’t be counted.

Elswhere in PA, a judge in Bucks County rejected the Trump campaign's appeal of the county's decision to count 2,117 absentee ballots with various deficiencies. Judge notes both sides agreed there was no evidence of fraud re: the ballots in this case https://t.co/AFQ487ZCYK pic.twitter.com/rtvcpd5kUL

This is a welcome change for Trump’s efforts.

Prior to this ruling, his campaign’s requests in other counties to toss undated ballots have been rejected (though they’re issuing appeals in those counties):

Other PA judges have rejected the Trump campaign’s challenges to absentee ballots with declaration deficiencies such as missing dates, addresses, or printed names — those cases are still pending up on appeal.

Therefore, the Allegheny County ruling could prove significant, as it’s feasible other higher courts could overturn lower-court rulings regarding this issue. We may also see it in other states as well.

Most politicians and members of the media say the race is over, but Trump and his allies will keep fighting. Especially in PA.

Just recently, Rudy Giuliani alleged Pennsylvania had 682,770 ballots “that weren’t inspected,” and should in turn be rejected. He also claims there were “two different standards” in parts of the state.

If those 682K ballots were tossed, like these Allegheny County ones were, that would make a huge difference.

And while many say that’s highly unlikely, the lawsuits will have to be settled and the results certified before Donald Trump finally concedes.