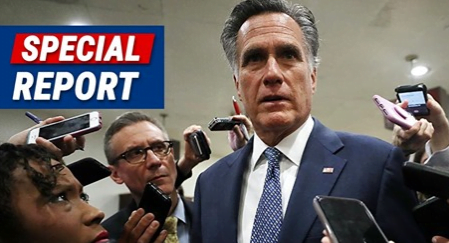 There’s one thing we can count on from Mitt Romney. And that’s we can’t count on him for anything.

The so-called Republican was nice to Trump when he needed his endorsement back in 2018. Since then he’s the worse fair-weathered conservative there is.

Remember he voted against Trump during the impeachment trial (no other Republican did). And he refused to endorse or back Trump in his re-election (though he claimed he thought Trump would win).

And now, as the media is pushing their narrative, Romney is changing his stances yet again:

Sen. Mitt Romney, R-Utah, took to Twitter late Thursday to rip President Trump, saying the president had failed to make “even a plausible case of widespread fraud or conspiracy before a court of law” pertaining to the 2020 presidential election.

At this point, are we at all surprised that Mitt is towing the establishment’s line? He said Trump can’t provide “even a plausible case” of widespread irregularities before a court of law.

Um… do you even know what you’re talking about Mitt?

There have been numerous reports coming out that questions the legitimacy of the ballot-counting process in many counties.

Heck, dozens of people have signed affidavits that testify to irregularities or outright wrongdoing.

We don’t know how this will all shake out, but even the most casual observer has admitted something isn’t right about this election.

Biden is really going to get over 80 million votes, far more than Obama, and a far higher turnout than almost any former candidate? That’s not adding up.

Every Republican should at least stand by the president as he fights for a fair and legal ballot count.

Trump’s lawyers made it clear during a press conference that the evidence they have compiled will be revealed during court proceedings, not before.

So, right now, nobody can definitively say there is “no” evidence—when the evidence Trump’s lawyers have compiled will come out during a court hearing.

Yet Romney is making a bold claim that Trump’s got nothing. Isn’t interesting that Mitt’s quote sounds like everything CNN, NYT, and other liberal outlets have been saying?

Almost as if old Mitt is just parroting the narrative, to stay in the good graces of the establishment swamp?

Here’s an idea: let’s make sure Romney is no longer in a position to comment on anything, ever again?

Are you paying attention, Utah voters?