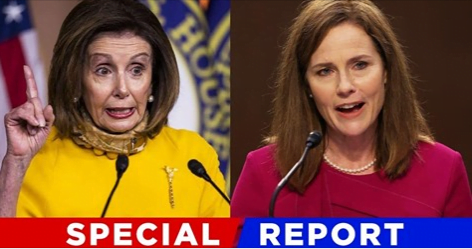 President Trump won a hard-fought victory to get Amy Coney Barrett onto the Supreme Court. And he did it by following the rules outlined in the Constitution.

Democrats couldn’t stand the fact that he was able to get another justice onto the court. They have been trying to delegitimize the victory from day one.

Some have even made threats to pack the court or make other radical changes to our court system.

All of this has been a seemingly petty attempt at getting back at Trump. Now, Nancy Pelosi is going even further by saying this about Barrett:

In a press conference with Democratic Illinois Rep. Cheri Bustos, Pelosi mentioned Barrett’s confirmation, saying, “the president is installing an illegitimate Supreme Court Justice one week before the election, after 60 million Americans have voted, who will dismantle the ACA, and won’t say, by the way, when asked, by Senator Feinstein, do you think Medicare is constitutional? She said she really couldn’t say.”

Nancy Pelosi accused Barrett as “illegitimate,” for no other reason except that Trump nominated her in an election year. Nothing Trump did was against the Constitution.

In fact, the only group that appears to be undermining the process are Democrats, who merely opposed Barrett just over partisan politics.

Pelosi accused Barrett of wanting to dismantle Obamacare. And yet, Barrett has never said anything that would suggest she would do that. She criticized John Roberts’ legal ruling , but that was based on legal philosophy, not policy preference.

That does not seem to be a justifiable cause to prevent a qualified judge to join the Supreme Court.

Democrats have shown over the last four years that they really don’t seem all that concerned with our Constitution. They have invented all kinds of ways to undermine the president, from attacks in the media to outright impeachment.

Notice how Pelosi doesn’t give any evidence proving that Barrett is illegitimate. What about the process was illegitimate?

Trump didn’t break the law. Nor did the Senate. On top of that, ACB is a respected judge in her field.

Republicans followed the Constitution to get her on the bench. Democrats were the ones who made open threats, refused to attend hearings and boycotted the vote.

Who is really acting illegitimate, these days?