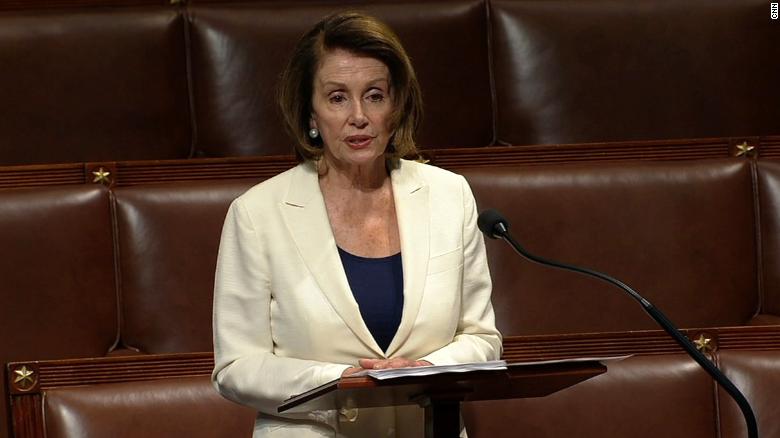 Clad in four-inch heels, Pelosi spoke for eight hours and seven minutes and was given a standing ovation by her Democratic colleagues when she yielded the floor at 6:11 p.m.

In her remarks, Pelosi announced that she and many fellow House Democrats would oppose the package unless House Speaker Paul Ryan, R-Wis., promised to allow a vote on a plan to shield from deportation hundreds of thousands of immigrants brought to the U.S. illegally.

“Let Congress work its will,” said Pelosi, who noted that Senate Republicans have slated a debate on the politically freighted subject starting next week. “What are you afraid of?”

TV monitors play Pelosi’s speech on the House floor while a news conference that she was scheduled to attend goes on in the background.  (AP Photo/Susan Walsh)

According to the House historian’s office, Pelosi appeared to have set a record for the longest continuous speech in the chamber’s history. The previous record, of five hours and 15 minutes, was set by Rep. Champ Clark, D-Mo., in 1909.

Pelosi’s speech would not have come close to the length of the 10 longest filibusters in Senate history. The most recent notable filibuster came in April 2017, when Sen. Jeff Merkley, D-Ore., spoke for 15 hours and 28 minutes in opposition to the nomination of Neil Gorsuch to the Supreme Court.

In 2013, Texas Sen. Ted Cruz, R-Texas, delivered the longest filibuster in 60 years when he spoke for 21 hours and 18 minutes against a bill to end the 2013 government shutdown in an effort to defund ObamaCare.

Pelosi’s speech was not considered a filibuster, which can take place only in the Senate. However, House leaders are often granted extra time to speak on the floor, a privilege known as the “magic minute.” For example, then-Minority Leader John Boehner spoke for more than an hour against a cap-and-trade bill that passed the House in 2009.

“You see, these people are being deported,” Pelosi said at one point, taking out a tissue. “We can do something today to at least make whole the children.”

Every minute you’re in front of the cameras, you make our job easier.

“Dear @NancyPelosi,” it read. “Every minute you’re in front of the cameras, you make our job easier.”

Even as Pelosi announced that the agreement “does not have my support, nor does it have the support of a large number of members of our caucus,” Senate Democratic Leader Chuck Schumer called the agreement the “best thing” lawmakers could have done for the middle class.

“The budget deal doesn’t have everything Democrats want, it doesn’t have everything the Republicans want, but it has a great deal of what the American people want,” Schumer said on the Senate floor, later adding, “And now we must finish the job. Later this week, let’s pass this budget into law alongside an extension of government funding. I hope the House will follow suit and President Trump will sign it.”