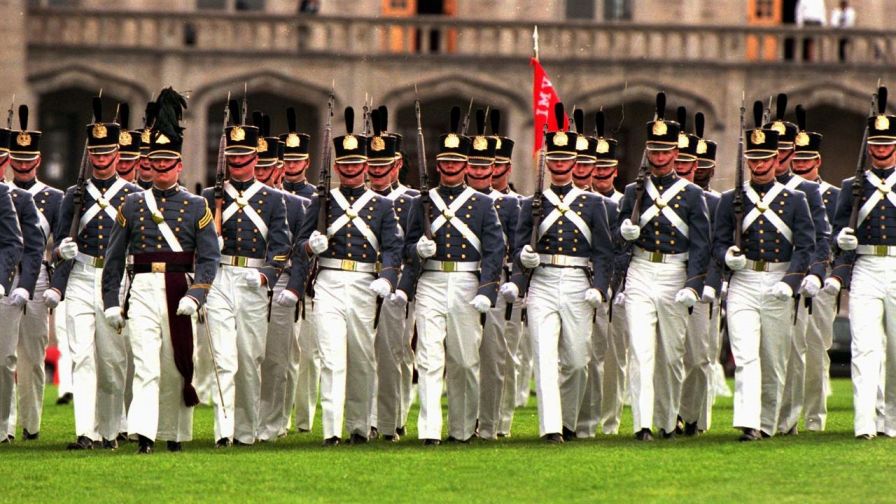 Democratic officials in the District of Columbia are mocking “fragile man” President Trump’s desire to hold a massive parade to show off the United States’ military, suggesting they will take steps to prevent it from taking place in the nation’s capital.

“I’d be hard pressed to find someone that doesn’t think this is really about one thing and one thing only — a fragile man trying to feed his own ego,” Ward 6 Councilmember Charles Allen told Fox News on Wednesday.

The Democratic councilmember suggested that D.C. could refuse to cooperate.

“The District partners with federal agencies all the time for major national events – from security, street closures, crowd management, and more,” Allen said. “Until we have a more specific proposal to work with, we’ll consider all our options to ensure any national event fits with the vision, values, and operations of the District of Columbia.”

Military parade down the streets of DC to feed an insecure man’s fragile ego? That’d be a big no.https://t.co/NHoiIEjj7e

He added: “The idea of tanks and missiles rolling down Pennsylvania Avenue doesn’t line up with my vision of D.C. values. If this were a proposal that truly sought to honor the men and women that serve our country, then ​I think many people would support such an event.”

Press secretary Sarah Sanders said Wednesday the White House hasn’t “made a final decision” on holding the parade but Trump is “exploring” different ways to highlight the country’s pride for the military.

Defense Secretary James Mattis, during Wednesday’s press briefing at the White House, said Trump’s “fondness for the military” is “reflected” in his request for a parade.

“I think we are all aware in this country of the president’s affection and respect for the military,” Mattis said. “We have been putting together some options. We’ll send them up to the White House for a decision.”

Since the idea was first made public Tuesday, the D.C. council has mocked the idea in several tweets, including one with an image of fake road signing prohibiting military tanks. No Republicans serve on the council.

“Tanks but No Tanks!” the council tweeted.

Tanks but No Tanks! https://t.co/jMbmumcfFy

“Despots call their opponents traitors and treasonous,” Phil Mendelson, the chairman of the D.C. Council, tweeted. “And despots like military parades. A military parade in our District of Columbia is not part of our country’s democratic ideals.”

Despots call their opponents traitors and treasonous. And despots like military parades. A military parade in our District of Columbia is not part of our country's democratic ideals https://t.co/Mj94Q9SnCj

Lindsey Walton, a spokesman for Mendelson, told Fox News that parades in Washington require a permit through the DC Department of Transportation and the Metropolitan Police Department. The inaugural committee files for a permit every four years after a president is sworn into office, she said.

Walton said Mendelson “does not wish to speculate on action” that could be taken before a permit for Trump’s parade is filed. But she acknowledged that the council does not have to approve permits.

Democratic Mayor Muriel Bowser indicated Wednesday that D.C. would refuse to pay for a military parade.

“We’re tracking media reports about the proposed parade and will have more to say when formal outreach begins,” Anu Rangappa, a spokesperson for Bowser, told Fox 5. “In the meantime, we do know that just like the wall, he will have to pay for it.”

.@MayorBowser Comms Dir on the prospect of a #MilitaryParade: “we do know that just like the wall, he will have to pay for it.” @fox5dc pic.twitter.com/a6gCfvJU0y

Trump, according to a story in the Washington Post, considered the idea of a military parade through the streets of the nation’s capital after attending France’s Bastille Day as the guest of honor in July. The president admired the country’s celebrations, and called the parade “magnificent.”

The newspaper reported that Trump made the order in a Jan. 18 meeting with top generals.

Congressional Democrats are also mobilizing against the idea. Democratic Reps. Ruben Gallego of Arizona and Ted Lieu of California sent a letter Wednesday to Mattis asking him to convince the president that the “frivolous, unnecessary exercise” could “harm America’s image.”

But Republicans have argued such a parade would be popular with Americans across the country.

“Ds and most media will decry this, objecting to the costs,” Ari Fleischer, the former White House press secretary under George W. Bush, tweeted Wednesday. “When it happens, many Ds won’t like it because it’s militaristic. But most Americans will eat it up. They’ll love the pomp and will take pride in the show of force/honor of the troops.”

Ds and most media will decry this, objecting to the costs. When it happens, many Ds won’t like it because it’s militaristic. But most Americans will eat it up. They’ll love the pomp and will take pride in the show of force/honor of the troops. https://t.co/E53nN1J3bq

The last time a military parade marched through Washington, D.C. was at the conclusion of the Gulf War in June 1991. The National Victory Celebration Parade, which strolled down Constitution Avenue, reportedly cost more than $12 million.