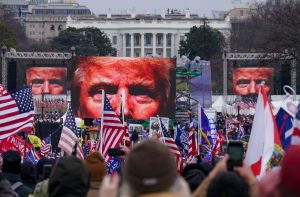 Since Joe Biden became president-elect, the Democratic Party has been breathing a huge sigh of relief. On Nov. 7, House Speaker Nancy Pelosi tweeted, “We kept the republic … It’s a time to heal and a time to grow together.” It looks like President Trump will be relegated to a one-term President and we have now entered the “post-Trump political era.”

Only the first half of that last sentence is true, according to today’s exclusive Suffolk University/USA TODAY poll. You may want to hold your sighs.

Based on our analysis, President Donald Trump would enjoy an almost-certain early favorite status in an open 2024 Republican primary and an equally almost-certain defeat in the 2024 general election. The poll also shows that there was a statistically significant drop in Trump’s 2024 support between December and January, following the incident at the U.S. Capitol on Jan. 6.

Let’s start with the 2024 Republican primary. In our December poll, 71% of Republicans said that they would vote for Trump in 2024, but today that number is 55% – a drop of 16 points in one month. The poll released today was conducted after the storming of the Capitol and during Trump’s subsequent impeachment, which was aided by ten House members from his own party.

The good news for Trump: after being impeached twice, overseeing the continued rise in COVID-19 cases, and potentially igniting the violence in and around the Capitol Building last week, 55% of his party would vote for him again. The bad news for Trump: In one month, he lost over 20% of his supporters.

Still, 55% goes a long way (and doesn’t include the 25% of Republicans who said that “maybe” they would vote for Trump in 2024). Especially if there are many candidates running for an open GOP nomination who may split the remaining political crumbs. Keep in mind that Trump handily won the Republican nomination with a majority of delegates despite only garnering roughly 40% of all Republican primary voters in 2016.

If you did not vote for Trump in 2020 or were too discouraged to vote, at this point your sigh might be turning into a groan – you may be having a flashback to election night 2016 when states in which former Secretary of State Hillary Clinton was projected to win in a landslide were one-by-one flipped to Trump. Hold your groans too for a moment.

Why? Trump is the ideal presidential opponent for the Democratic Party nominee in 2024. In the general election, 60% of voters would not vote for Trump in 2024. That’s up 4 points from the 56% who wouldn’t vote for him in December and – if that should continue to hold – it all but assures a win for the 2024 Democratic nominee. When it comes to legacy, 58% of voters now say history will record Trump’s tenure as a failure. Trump, by winning the 2024 nomination, could do the most effective work for the Democratic Party by defeating a new fresh-faced viable Republican and then, as the Republican nominee, getting routed in the general election.

This situation has rarely, if ever, been seen in U.S. history: a president who was voted out of office after only one term by a relatively wide margin in both the popular vote and Electoral College, yet is still popular among his own party. Trump’s popularity puts Senate Republicans in a tough position even though they not only have the power to convict him, but also to ban him from ever running for office again, as allowed by the Constitution. But will they?

Even as he leaves office, the Republican Party is still very much Trump’s party. According to the poll, just 31% of voters said those Republican House and Senate members who called on Trump to resign are doing what is best for the country. Meanwhile, 56% said they were simply seizing the moment for political gain. Among Republicans, 11% said “doing what is best for the country” while 85% said “seizing the moment” or “disloyal for turning their backs on Trump.”

With basically majority support – and some might even call it control – Trump has a plethora of options available to him.

He can use his wealth, support, and relationships with Trump loyalists to exert revenge on those Republicans who impeached him or opposed his challenges to the results of the election. It has already leaked that he is allegedly targeting “disloyal Republicans” with a well-funded super PAC for the 2022 midterms. The result would again help Democrats. He knocks out Republican candidates with extremists in the GOP Primary who then go on to lose in the 2022 midterms. That would make Pelosi smile.

Bottom line: the Trump-era isn’t over. It’s just beginning. But that just might be what Democrats want.