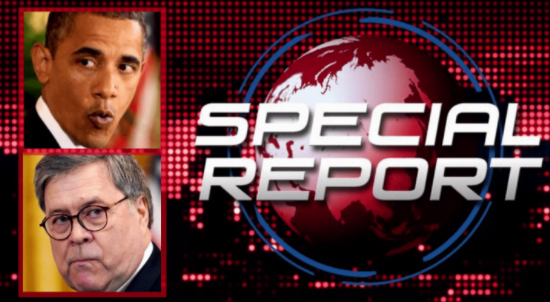 And it started long before King Barry had any idea…

Mueller time is over, time to pay the Barr tab!

Attorney General Barr is turning tables on Obama and his Democrats faster than anyone expected. After years of the Deep State spending $35 million on a Russian witch hunt hoax, Barr is getting a turn.

Today, he announced he appointed a real bulldog to look into the FBI’s investigation against Trump.

And we’re just learning now, he’s been at it for weeks!

The U.S. attorney appointed to examine the origins of the Russia investigation has been working on his review “for weeks,” a person familiar with the process told Fox News…

Durham, known as a “hard-charging, bulldog” prosecutor, according to a source, will focus on the period before Nov. 7, 2016—including the use and assignments of FBI informants, as well as alleged improper issuance of Foreign Intelligence Surveillance Act (FISA) warrants.

Oh boy! Looks like the Obama will be running scared, thanks to Barr’s bulldog Durham is on the case.

Out with Mueller, in with Durham. Democrats will learn this guy’s name fast.

This prosecutor is known for being hard-charging. That’s just the kind of man you want hunting down the Left’s secrets.

The shoe’s on the other foot now, Barry!

We don’t want a wimp confronting the layers of corruption the Democrats are hiding under. We’re trying to drain the swamp, folks.

What we need are a few bulldogs to do the hard work.

And that’s just who Barr hired to take down Obama’s FBI.

What’s really amazing is that Durham has been at it for weeks! While the Democrats were grandstanding, holding Barr in “contempt,” Barr’s bulldog was already uncovering the bodies.

Barr blindsided the Left—they aren’t even able to prepare! Durham’s got a head start. Just imagine what he’s already found.

You better believe Obama and Clinton’s cronies are shaking in their boots. It’s only a matter of time until we discover just what they were up to.

We said heads would roll a long time ago. Looks like we’re about to see it!

SHARE if you support Barr investigating Obama and his Democrats!