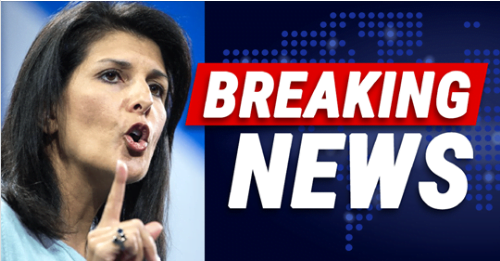 Joe Biden has apparently returned to hiding, as a bombshell story about his son makes the rounds. The media has tried to ignore the news.

And Biden finally spoke out briefly and made a weak attempt at deflection. He says it’s just a smear from Trump’s henchmen.

Well, Nikki Haley is not going to put up with such a bogus response.

She’s demanding clear, definitive answers from the former vice president in a tweet:

DNI & other agencies are now saying the Biden laptop issue is Not Russian disinformation. The Biden campaign hasn’t denied the emails or their content. Biden has to answer the question of his involvement lobbying for his son & what kickbacks has he recd as mentioned in the emails

Haley points out how the DNI and other intelligence agencies debunked the quickly cooked-up line from the left that the laptop was “Russian disinformation.”

Evidence points to the probability that the laptop was owned by Hunter Biden and that the emails are real.

But the Biden campaign has refused to provide answers, even as they are unwilling to deny the content of the emails.

So, Haley is calling on the Democrat candidate to answer the “question of his involvement” in what these emails are suggesting.

If the emails are real, they paint a pretty bad picture for Biden. Although he’s claimed to know nothing about his son’s business—and never even asked him about it, the emails reveal the opposite.

One email claimed Joe met with one of Hunter’s Ukrainian colleagues. Another reveals the possibility that Biden took payments from China.

True or not, why aren’t we hearing from the campaign? If these emails are bogus, then simply get out in front of this.

But if they are real, then Biden’s hiding makes a lot of sense, doesn’t it?

The liberal-leaning media might be complicit in protecting Joe, but that might not cut it for Americans.

As voters prepare to go to the polls, they need to know if there is any truth to this bombshell story.

Haley thinks the least Biden can do is answer these questions. Do you agree?