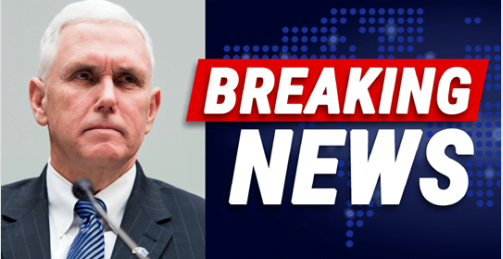 Despite what the media is focusing on, the White House continues to do its job battle COVID-19. Yesterday, Vice-President Pence gave an in-depth press conference. He detailed the progress the United States has made in addressing this disease.

He ended the conference by urging all Americans to do their part to protect their health. As you can imagine, the media weren’t very interested in this important update.

Instead, it seems like they wanted sound bites they could use to spin the ongoing election battle. Pence decided not to answer questions—which is something Joe Biden does very often with no pushback from the media.

But, instead of cowing to Pence as they do for Joe, the media erupted in a rage. Do you think we’re overstating it? Then watch this:

Chaos erupts as VP Pence walks away from the podium
pic.twitter.com/01U4TaIwW6

As Pence then turned around and began exiting the room, reporters began to scream at him for not answering questions which is a sharp contrast of how reporters have treated Democrat Joe Biden over the past several months when he has refused to answer questions at the ends of news conferences.

These people who call themselves reporters didn’t seem very interested in the information Pence provided about COVID.

Instead, they hurled wild accusations at him about the election, hoping to get a reaction. They even want as far as to accuse Pence and Trump of “undermining a democratic election.”

How funny. And I thought calling an election that was far from finished, just to force Republicans to give up despite evidence of irregularities was “undermining” our democracy.

But no, according to our mainstream, simply wanting to investigate serious reports of irregularities and wrongdoing is “undermining” our elections. Openly ignoring reality—which even Fox News is guilty of—isn’t.

And I also find it utterly hilarious how this same group of yes men can bow to Joe Biden for months, just accepting when the old man refuses to answer their questions.

They never bothered holding Biden accountable before the election, especially when information comes out that could damage both his and his family’s credibility.

If they really want him to be president so badly, why the heck can’t they demand he answer questions?

We all know most MSM outlets are crooked. But this year we’ve seen them stoop to new levels.

They were very concerned with COVID back in March and April and even bothered to ask Pence questions about it back then. But then, of course, they were able to use the information to undermine the Trump administration.

Today, with good news about vaccines on the horizon, the media would rather shout at him about undermining democracy.

Do you stand with our media or Mike Pence?