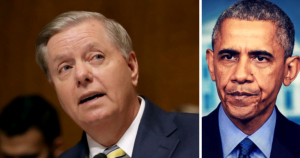 If you believe Democrats are going too far with this second impeachment, you’re not alone.

They presented no evidence, nor did they even conduct investigations. Many accuse them of weaponizing impeachment. Plenty will agree.

Americans hope the Senate will be intelligent to shut this charade down.

Lindsey Graham has called this effort unconstitutional. He also said it could lead to some unintended consequences. From MEAWW:

“We impeach the president today without any evidence. It’s just sheer hatred. If this becomes the norm, be careful what you wish for today. Should we impeach Barack Obama because, for 24 hours, he never lifted a finger to help those people under siege in Benghazi? Where does this stop?” he added.

Show Off Your Support with this President Donald Trump

‘Under this theory, the radical left — if you can impeach a president after they are out of office, why don’t we impeach George Washington?

Many Constitutional experts have said Congress can’t impeach or convict a president after he leaves office.

Democrats have ignored this, going full steam ahead with their agenda.

Sen. Graham warns this could lead to many unintended consequences. What would stop radical leftists from “impeaching” George Washington because he owned slaves?

Or if Republicans regain Congress, “impeaching” Obama over his lack of leadership during the Benghazi attack?

Democrats have in the past shot themselves in the foot when they gained too much power. They eliminated the filibuster over judicial appointments during Obama’s era. When Republicans regained control, they placed record numbers of judges.

Could this happen with impeachment? Graham urged his Republican colleagues that “enough is enough.” He warned that if this went too far, the presidency will be destroyed.

He’s right about that. What good is our president, when a group of out-of-control congressmen can just impeach him at a whim?

The consequences for these radical moves need to be dire, so they never happen again.