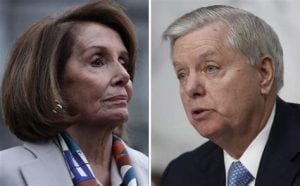 Ever since January 6, Democrats have been trying to take down their Republican colleagues. Blaming them for what happened, they are seeking ways to either prosecute, remove, or ban Republicans from the public square.

They don’t have much to go on, but Democrats are pushing this narrative to turn Americans against the right.

But Lindsey Graham is reminding America that Democrats may be trying to shift blame. Because it’s their own folks who were responsible for protecting the Capitol.

To the chagrin of the House Speaker Nancy Pelosi’s office, Sen. Lindsey Graham… pointed to the speaker and asked where was she when it came to ensuring the protection of the legislative seat of the U.S. government?

The Sergeant at Arms of the House, under the direction of the speaker, is responsible for security, along with the U.S. Capitol Police…

“…how in the hell could that happen? Where was Nancy Pelosi, it was her job to provide Capitol security? We will get to the bottom of that.”

What Democrats refuse to admit, in their rush to condemn Republicans, is that the Speaker is supposed to secure the Capitol.

Americans were shocked to see an utter lack of coordination and force in response to the events of January 6. We watched as those who were supposed to protect our government were slow to act.

I mean, where were they?

Was Nancy Pelosi hiding under a desk, when she was supposed to be directing law enforcement efforts?

It harkens back to another Democrat leader by the name of Hillary Clinton, who did nothing as our men were attacked in Benghazi.

Graham is reminding the country of this sticky, inconvenient fact. Democrats are all over the place accusing conservatives of “inciting violence” (an accusation that is hard to prove). All the while, one of their top leaders appeared to be MIA when she was needed the most.

What good is a Speaker who can’t even defend the building?

Do you think Pelosi should answer these questions from Sen. Graham? Or will she hide behind the media, counting on them to protect her?