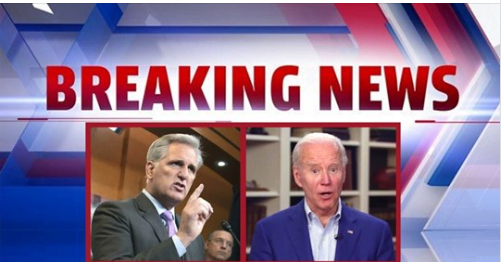 Joe Biden made a bold statement when he claimed victory. He said that the vote showed he had a mandate to implement his radical, liberal agenda.

That seems like an odd conclusion, given his plans involve shutting down the economy, opening the border, and raising taxes. All things Americans have expressed disgust for time and again.

And now, Minority Leader Kevin McCarthy is making it perfectly clear what kind of mandate the American people have given:

House Republican Leader Kevin McCarthy said this week that the 2020 election was a “mandate against socialism,” touting Republican gains in the House of Representatives and arguing the results show the GOP is the “party of the American worker.”

McCarthy, of California, during a press conference on Thursday said Republicans’ “success is already threatening Democrats.”

“Instead of planning to work with us, they’re already plotting ways to silence the minority party’s voice in Congress,” McCarthy said. “We won’t let them silence us.”

Democrats lost many key seats in the House this election, largely thanks to their embrace of the radical left.

Joe Biden says Americans want his brand of left-wing politics. Really? Then why did Democrats lose so badly in so many state and local races?

It seems the only big race they won… was the presidency. At least, that’s what the media wants us to believe.

All through this year, we’ve seen a very strong contrast between what Democrats are doing and what Americans want.

Americans want a thriving economy. Joe Biden is promising higher taxes, longer shutdowns, and the death of many industries.